We had to say goodbye very soon to our beautiful Academy not aknowledged by any existing State! To think that uncle Aristotle, trains his Swiss Spearmen to discipline and endurance so well!
The main court is were he trains them... we have to say it, and eventually you will find out, that Castalia was a nice cadet too!
Still, as we know it, our girl likes to go out at night... which means discipline isn't really her thing... even though she seems to take punishment with patience and knows her way to the tower... way too well!

The tower isn't very tall, but if it were any taller I don't think it would keep Castalia from escaping anyway. It seems like the girl had already experienced the thrill of an evasion quite a few times already... which tells us she is a good climber!

This drawing was originally meant for Van Hood's fortress on the Island of March... as you can see I couldn't figure out a 5 point perspective here and the bottom part isn't curving as it should.
Anyway we are not interested in the bottom part... the tower is in the top part so I cropped the drawing - we don't waste a thing! 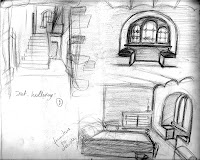 I never got to use the interiors except for the top window... which is in Castalia's cell. Even though there are sitting places... she sits on the floor, the little savage.

Eventually I took away the bed and put a table where Pifetto and the twins sit and make noise when Castalia's been punished!

The rest of the fortress... I didn't have a clear image of... so I never did draw nor sketch a hallway or a room... that's why the rooms looks so sketchy and hazy in the first chapter of the comic.
This won't happen with Balthasar's ship, since I have already designed layouts for all the environments.
Posted by dedasaur at 10:14 AM

Oh, I remember this ^_^ . You posted the blue pencil version of it on DevArt (I have it among my favs *_*). The perspective is so eveocative and the building and mood just so pretty.

the blue pencil one is slightly different... same composition but different subject (it has shading in it too)... that's Nicco's house. We'll probably get to see Nicco one day... I hope... XD