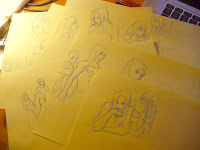 Rendered and lettered 8 pages of the 13 that should be up this week!
As you can see I already started on the drawings for the following pages of the chapter... lots of Westley-luv in that chunk!
No, your eyes are not seeing things... I do draw on yellow paper with blue pencil--- my eyes are too tired recently, I found this to be the best way to draw and keep my eye relaxed.
Yes, eye ^_X / ahr, as I am almost blind from my left eye... quite the pirate, aren't I? And I do walk around with a bandana most of the times... as a matter of facts I have been a pirate since I was 7 or 8 years old.
It all started for a Mardì Gras party in school. I think I had a Fairy dress that year, fairy as in Pinocchio's Blue Fairy, with a pointy hat and a wand. I didn't do well with wands, I had the tendency of striking others with sticks so ahahahaha... and since my classmates were dressing up as: musketeers, zorro and knight... they needed a pirate, don't you think?
I asked my mom permission to cut a pair of old pants and she didn't ask what it was for, she took me to school dressed as Fairy and when she came to pick me up I was dressed as a pirate! I had made own costume, in secret: the cut pants, with fringes, a red and a green sock, a bandana, a shirt with stripes, a vest and a sword (that one I own already, since I've always had mostly boys toys - all my friends were boys).
I think my mom understood then and there that I was a real pirate at heart - I could not be subdued, could not submit to any law that stated that girls should have to be dressed like fairies if they wanted to be pirates, and... I loved the freedom to express myself most of all!
I dressed up as a pirate when I was 17 years old, again, for a party and when I was 26 for Halloween in San Francisco... 2 years before The Pirate of the Caribbean came out to the movies ^_^/
Yohoho, I am a pirate a pirate am I!
Posted by dedasaur at 9:06 PM