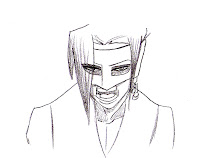 Friday afternoon blabber.
It's women's day on monday, I have been asked for a little surprise and I do hope I have the time to prepare one!
I am behind schedule, work is pressing me with deadlines and I do work on the comic at night, from 8 to 12./1 a.m.
I am currently working on page 21 of 45. I don't dare to look at the countdown up here... I hope I can make it but if I am late you won't hate me, will you?
Anyways let's keep the blogger going, since I am on my coffee break!
So why did I pick Wilson Kane as a name?
Kane is easy, it comes from two different things: Citizen Kane and Cain (from the bible, yes).
Do you guys like Orson Welles? Citizen Kane is a terrific movie, the way it is shot (the framing, the composition of the shot, the lights, the set design, I love it all), the story with that fantastic twist in the end! So... err, yes, I love the movie and picked the name from that movie.
As for the Cain part... it's related to another story I was writing that turned me into a big Cain fan - of course my idea of Cain and the reason he invented death lead me to read all kinds of legends on him and one thing led to another. I don't think I will ever get rid of my own ideas on Cain and what his existence really means and I really liked all the legend that were born from him... aside from the vampire legend which has no foundations (now, I don't like vampires, everybody knows it okay, but you don't have to go as far as look into the Bible to find yourself decent roots, I think Vlad is cool enough and you should stick with Dracula who was a Prince, after all, and a great historical figure too! Leave the Bible alone... it is somebody else's sacred book! I don't mess with your beliefs.)
Okay I don't want to say too much about the Cain part so let's say that, mostly, we should all thank Orson Welles for coming up with such a cool name.
Now... Wilson... no it's not because I used to play volleyball! XDD (you were thinking about the balls, weren,t you?). And I would love to tell you that I am a big Mark Twain fan and that the name came from Puddin'head Wilson - a book that I adore! Unfortunately Twain came in years later in my life and as much as I love Puddin'head Wilson I cannot honestly say: I shall take thy name, sir, and give it to my pirate.
The reason is pretty dumb...
Well, when I was a kid, there was a grocery store around the corner and the lady had called her son Willy. He used to come and play in my yard and one day somebody mentioned the fact that his name was: Wilson!
So everybody started laughing and made fun of him...
I didn't quite get, back then, what was so funny about being called Wilson... I still think it a nice name. Maybe it doesn't sound good on a boy but it suits an adult pretty well.
The point is that, somehow, that name got stuck in the back of my mind and when I decided to pick Kane as a last name and was looking for a fist name... Wilson showed up, it had a nice ring to it and there it was: Wilson Kane.
With a name like this... a twist cannot be avoided.
Posted by dedasaur at 3:42 PM