"If the mountain..." (I think I wrote this sentence the other way around in the Italian version and I shall have to fix that, LOL).
This proverb was chosen because of its being coeval to the story itself in the first place. Although it has always been attributed to the Prophet Mohammad it was actually something that Francis Bacon first mentioned in one of his essays.
The second reason I chose it it's because, being Cat Egyptian (not black African), he was probably raised a Muslim. Chances are that if the butt bucket was not introduced by the previous pirate Balthasar, grandpa Cosimo, it would have been introduced it. Currently there are 3 Muslims on board - although Cat does not really believe, traditions and how you have been raised become habits: Cat, Yusuf (the tall guy with the pointy nose) and Husein (the short guy with the turban).
The third reason I chose this it's because of it's literal meaning... I think it's very direct and to the point. Not to mention poignant.

Somnambulism... is a real disease but it was not taken seriously or not seriously treated until the XIX century.
But we know from Shakespeare that people knew it existed!
Most of the time the action done during the condition of sleep walking is not connected to subconscious will at all. In fact, if you consider for example, La Sonnambula by Bellini... Amina really does not have reason to walk in the sleep, she is not guilt ridden and she does not care for Rodolfo either... she simply walks. Most modern cases are completely not connected to the person's wishes either.
In our case is Callista driven by the"troubled heart" sentence she overhears in her sleep or did she miss Cat so much that she went to see him? Was she simply so sleep deprived that the sleepwalking condition kicked in or was she only half asleep? Who knows... it went well anyways.

Remember the line: outside of danger everyone acts cool?
I think it also applies to love advise. How many times you go to a friend to ask: what should I do? - and they tell you: you should tell him.
Which is something they would never do themselves. LOL There you have it!
Lio has had a nice conversation with Foxy but much like Kes she has not said the "L" word yet, neither has Castalia. Ironically enough all these emotionally constipated and clueless women are pushing the little sister to go ahead and confess. Turns out Callista really is the bravest girl on Earth! Ha ha ha.

Pudic. Funny enough while other online dictionary don't have a clear definition except the one related to pudendal... wikitionary has the same definition as my old Oxford Dictionary.
Clear proof that old books and paper still are better than the web, when it comes to content (also proves that the web needs to go semantic and that the google engine is getting worse and worse day by day).
Btw I just came out of class where I told my students: If I say a complicated word and you don't know what it means... please stop me and ask me so that I may answer: go get a dictionary!!! - that's what my teacher always told me when I was a kid XDD it was the best thing that ever happened to me, let me return the favor. (honestly, I think it makes people more proactive).
The contemporary version of it would be: do not panic, google it! Ha ha ha. 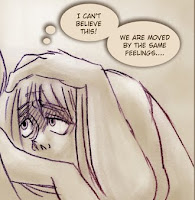 As somebody already noticed on Smack Jeeves, Cat and Callista's story is a palindrome (go get your dictionary, now XD). But while Cat was physically giving things to Callista to help her metaphorically, Callista is emotionally giving help to Cat to raise him up psychologically.
Starting with the key point that these two are the same, share the same view and see each other like a reflection in the mirror, Cat develops immediate understanding and thinks: I have been there, I can help.
Callista, by reaction, enters as a round and does the same in return: I have been there, I can help.
So if he physically gave her shoes of the same size - metaphorically gave her legs to walk.
She gave him a feeling of the same size - metaphorically gave him legs to walk too.
The whole thing is also about them walking - hand in hand - without tripping (Callista on tongue and feet and Cat on low self esteem). He gave her his hand first, the second time, on the island, when he did not know what to do... she was the one who reached out and stretched her hand out to him.

Of course when you get comfy shoes, no matter how comfy they are you still have to get used to the fact you have comfy shoes, especially if you did not have them before. So it might take a few days to adjust (but luckily the shoes - in this case Callista - know how to put you at ease by being at ease) Cat is still a bit out of it, actually not a bit... he is so much out of it that he forgets his most important headband!!!
In short his waking up and rushing to work is the most gigantic "HUH?" he ever uttered.
But Callista, being the smart girl she actually is, since she understands that what they have been through is a delicate moment in life for both of them bur requires adjustment, decides to remove any form of embarrassment and puts the blame on the hair being too long. Isn't she a cutie?
Posted by dedasaur at 2:29 AM

They truly have a wonderful relationship, helping each other becoming better people whenever it's needed... It's great! : )

Since the first time she decided to climb up the ropes to bring the watchman in the crow's nest his meal (can't remember the names), I thought that Callista was at the same time the sweetest and most shy of all of them, but also the most valiant. This chapter only reinforced that idea, she's also like that with emotional risks, not only physical ones. It's impossible not to become fond of her.