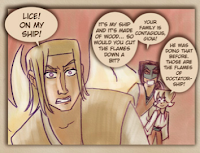 We have very little curiosities this week.
The first concerns lice on board, which were not so uncommon and quite a big threat to deal with.
Some of the oldest remedy saw, as a base for the cure, brimstone - none other than sulphur.
Everything else made with lard or other remedies came after the 1700.

Now a few things we need to know about head lice:
1) there are different kinds of lice: body, head and pubic lice.
2) they are specie specific: animals cannot spread lice to humans and vice versa.

Human lice, to survive, need human blood. Therefore, for those of you who were worried about Rose, do not fear! Rose is save!

What the doctor is talking about here is the concept of afterlife.
The concept of afterlife was very different for Jews than for Christians.
Christians would have very distinctive places called Heaven and Hell (then Purgatory was introduced and I think that it was recently removed again).
But because even Judaism is not all the same (just as there are many types of Christians in the wolrd) some of them would tell you that they don't know what happens to your soul after you die. Judaism concentrate more on the importance of the Earthly world... but in classical judaism there was this concept called "the world to come". In the Hebrew Bible this concept does not show though.
So what's after life? Maybe a big waiting room... but maybe they just don't know. The important is Here and Now. (Sorry if I simplify this too much, if you are interested in religion studies, please contact a University close to you that provides lectures on this kind of topic.)

As simple as that: Halvah is a Jewish dessert... but it's very common to the Middle East and there is a Greek version of it.
Even though the name is similar, they can be actually pretty different from Country to Country.
So maybe Kes is referring to her hope to get Pifo to make some Halvah for her... but maybe she is saying she will have a jewish delicacy after dinner!
Who knows? We'll see what happens next.
Posted by dedasaur at 1:47 AM

Was the comment I made too personal? I heard that you weren't accepting that anymore... What about the things I was wondering? Are you going to reveal Wes' reasons for not eating?
I still wonder if Kes would like baklava...

I cannot answer to these questions here, it would be spoiler. You have to wait for the comic. :D