It's been a while since I last wrote a writing tip.
I've noticed that these notes have started circulating over the internet (the images too although they are not that great hahaha).

Today I've decided to talk about one of the most solid structure you can apply to your story.
It does not matter whether it's long or short, epic or comical, it always works somehow.
It's called: 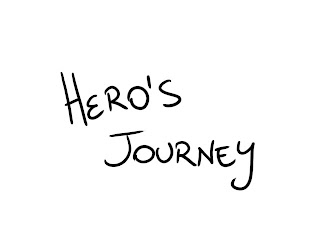 This theory, to be applied in scriptwriting, was developed by Christopher Vogler who analyzed a book by anthropologist Joseph Campbell called "The Hero with a thousand faces".

You'll find plenty of Vogler's graphs online but for my students and for myself I came up with a short silly comic of sorts. (Again the drawings are not that great).

So here's the Hero's Journey in 12 steps. 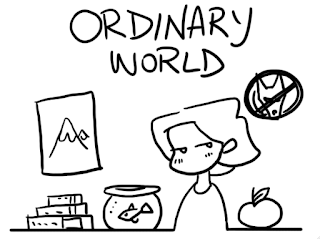 Meet our hero, Pretty Boy, surrounded by his everyday life... in his natural environment.
Pretty boy likes mountains, read books about them, loves his goldfish Goldie, and hates dogs.
(star wars: Luke goes about his life with uncle and auntie) 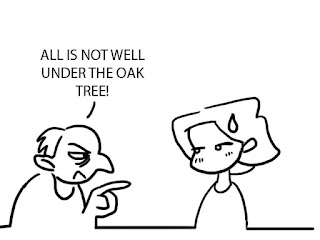 All of a sudden, as he goes about his life, Pretty Boy receives a call to adventure... a mysterious one... sometimes a very hermetic/cryptic one.
(star wars: Luke finds Leia's message while cleaning the droids).

3) Refusal of the call 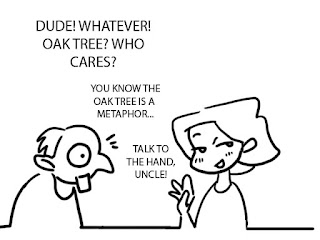 Pretty Boy is reluctant, like all heroes should be, it's not like you dive into adventure after they tell you "you are the chosen one" without thinking about the absurdity of the situation for a moment or without even asking "why me?".
(star wars: obi wan asks Luke to go with him and the boy initially refuses). 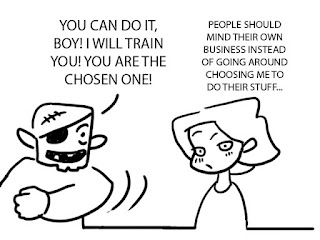 Pretty Boy is still a bit reluctant but the mentor is quite pushy at first and tries to convince him hard that with some training and hard work he can become the chosen one.
(star wars: Obi Wan says he will teach Luke the way of the force Luke still says no).

What needs to happen now is an insighting accident this is also considered to be our first plot point or Plot Point 1 (we have two p.p. in a story, so as I remind my students "in a story we pee pee twice, huh"). 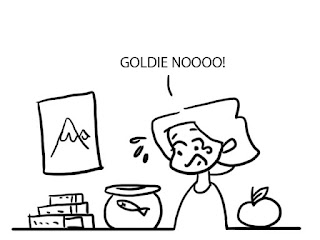 This accidents flips the ordinary world upside down somehow or makes the hero feel that things could never go back to normal now that this thing has happened.
(star wars: uncle and auntie are killed by the stormtroopers). 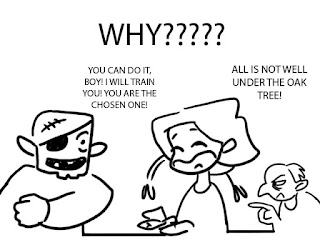 This accident reminds the hero about the call to adventure and the words of the mentor echo in his ears. That's when he decides to leave the ordinary world and enter the magic world (it's not necessarily magic, eh, it's called that way just because it's different from his every day life).
So the hero goes... with one extra motivation - the accident. 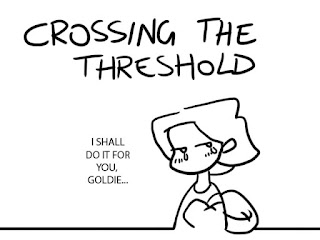 The adventure finally begins.
This represents the end of Act I of our story.

What follows is a huuuuge development, a series of "and then" (and then this happens, and then that happened, and then he went in, and then he fought, and then he met this guy)... and things gets progressively worse and worse and more complicated.
So what does Act II mainly contain?
Well first of all this: 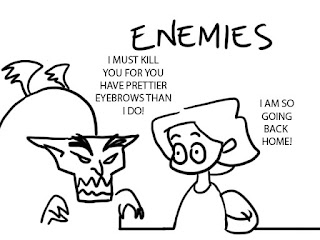 Pretty Boy meets his enemy first, sometimes not in person, sometimes in person, sometimes through legends, hearsay, and other form of communication. The enemy at this point of the story is very scary and super strong and the hero does not stand a chance.
(star wars: Luke and Obi vs. the empire - the plan is to destroy the Death Star). 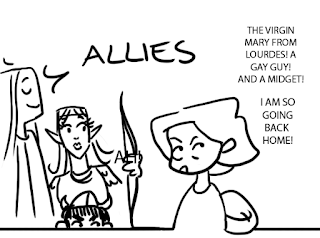 Pretty Boy needs allies at this point, somebody that will help him in his quest.
(star wars: Han Solo and Chewbacca) 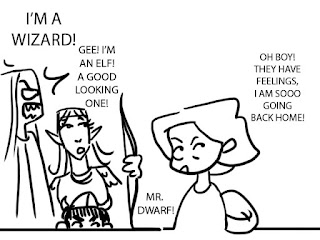 Ehm... sometimes allies are not easily accepted, don't get along... or are not to be trusted. Or look very unlikely to be a hero or of any help at all!
(star wars: Han Solo and Chewbacca)

Then come the tests and they get harder and harder as we go along. 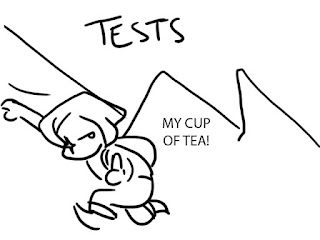 Some tests seem to be meant for our hero... to boost his confidence, to show off his skills (why tell us he likes mountains at the beginning of the story if he is not going to climb a mountain in the end?).
Climbing is piece of cake for our Pretty Boy!
(star wars: Luke's knowledge about mechanical stuff comes in handy at times, eh?). 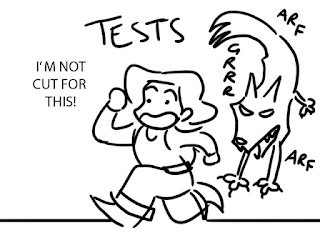 Of course most of the times the tests are super scary and the hero almost cannot make it by himself (that's why he has allies to help him). In the end he manages to get away.
(star wars: Leia is rescued) 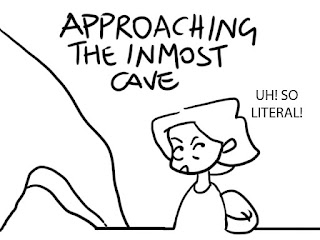 Don't complain, Pretty Boy, you are not Frodo!
There's usually a moment of quiet before the storm hits. This is the moment where the hero prepares himself because what he is about to confront could see him triumphant or leave him for dead.
He is about to confront his greatest fears too and his biggest enemy.
(star wars: the rebels prepare to attack). 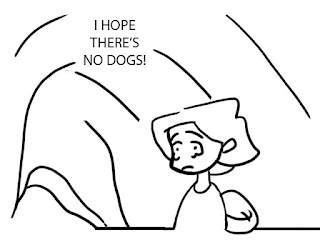 And as he is about to approach this moment where he could win it or lose it all...  Instert your Plot Point II here (here's where we pee pee the second time) so we reach the Climax of our story which is also known to be the Hero's... 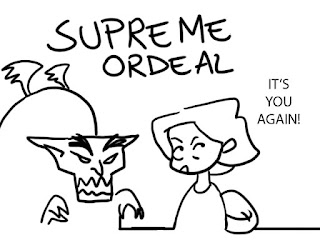 Now a bunch of things are supposed to happen in very little time here. In most movies, these days, this moment is reduced to an epic battle and a huge fight (it's a bit too linear, if you ask me, because we need to remember that a fight is not a conflict nor it constitutes enough material nor depth to be considered a conflict. A fight is just a fight!).

During the Climax the hero will be left for dead a couple of times, the audience will believe he's dead and I don't mean only physically I mean psychologically too.

Now star wars does not help us much in this case so I'll skip to the greatest Supreme Ordeal Luke has ever lived througout the trilogy: meeting Dart Vader in Empire Strikes back. 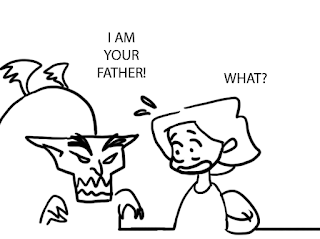 This is the moment where the character learns something about himself/herself. Not necessarily that their enemy is their father, no, but through their action they realize the stuff they're made of.
"Oh, my God, I am so weak, I am such a coward, I cannot do this!" and then stand up and fight, for example.
Luke's reaction was "that's not true, that's impossible!" - he failed his supreme ordeal and had to come back in a third movie as a Jedi - well he wasn't ready anyway, Yoda had said. - but he had taken a strong hold on which side of the force he would chose so he did win his own integrity.

But if the hero resists and even as he is left for dead find in himself a little bit of strenght to stand up and fight back... 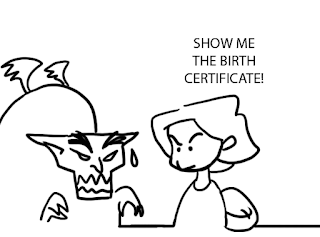 By the way our act II transition into act III across this moment as the climax reaches its end. 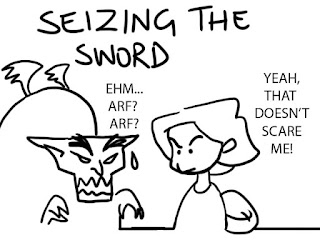 Some people debate about this moment some call it death and rebirth or return with the elixir and stuff... I think in some movies the seizing the sword moment is particularly evident and clear as "the fight back" moment.
In Tim Burton's Alice in whateverland movie... Alice actually holds a sword and fights a dragon.

I prefer to work this way because seizing the sword still does not mean the hero will survive and I still think the hero has to be left for dead at some point.
But it's true that these particular elements could be put in any order as the end result would not change much.

In some cases Death and Rebirth happens now (I think that's too linear and is also too literal, in some stories the Hero actually dies and is resurrected by the end of the story and then fights back - at times it feels as if the whole thing was penned down by writing shortcut sentences next to the structure and then the whole thing got developed into paragraphs and dialogues). 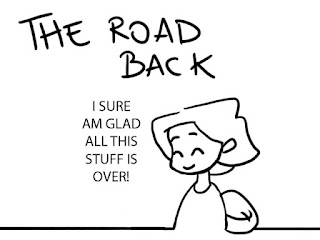 I feel that the death and rebirth moment can happen during the road back (the physical one, of course), but the road back is the moment were the hero has finally won and has to decide to return to the ordinary world.
So Pretty Boy has won for Goldie and now can go back home. 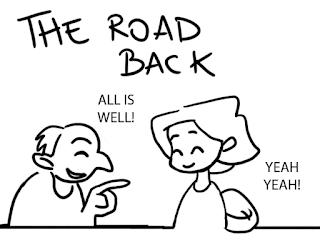 So you see now Pretty Boy's attitude has changed. He's gone from black to white he's gone through an arc and as acquired new knowledge and understanding. 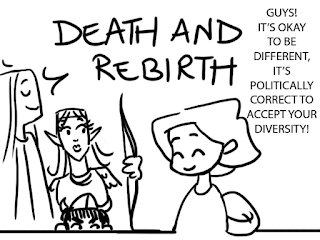 could also happen like this. The old passive aggressive Pretty Boy has gone. He learned to appreciate his allies, since they helped him, he has gone to through so many tests and had to face his worst fears... so he has learned to conquer fear.
We welcome the new Pretty Boy.
(star wars: this is were Luke is celebrated as a hero) 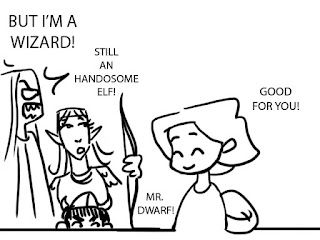 At times the Return with elixir happens before but there are stories where... the moral of the story comes  last.

12) Return with the Elixir 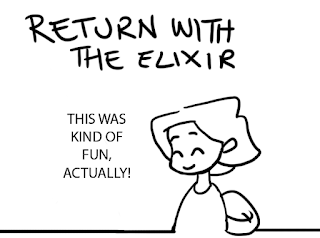 So Pretty Boy will share what he has learned with others, he might give us the moral of the story or simply enjoy his new knowledge and maybe put it to use another time (in a sequel).
He is now a brave hero who has understood his own nature, has reached his goal, conquered his dream, confronted and overtook the nature of the conflict and overcome his fears. 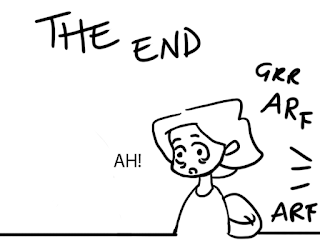 Overcoming fears does not mean they are gone. They are still there, under control, but still there.

All the character in The Pirate Balthasar go through a personal hero's journey. Can you recognize the different stages?

Writing tips index.
Posted by dedasaur at 8:06 AM