Things better go full circle when you write. People feel gratified when all the lose ends are closed and tightened.

You can use something called a frame (where you start with a scene, then flash back until you go back to the initial scene: like Megamind, a guy falling to his death asking "how did this happen?" and giving you the whole story until that point. Then developing the ending from there.) or simply go full circle by beginning with one shot and ending with the same one, only the first time all is lost and the second time all is found (for example a guy crying you think he lost something but truth is he is happy - or the same shot, only the first time the room is empty and the second time the person he was looking for is there). 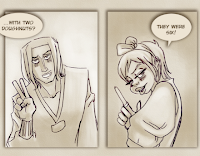 How do you go full circle is by picking a theme or an object and sticking around it using variations on the theme. You apply a different meaning to it every time the item shows up and in the end you reveal that the very first meaning of that item/word was not what we expected it to be.

Let's start with the first main theme: the doughnuts. This is the couple theme.


Westley buys Cassandra six doughnuts. She minimizes the event by minimizing the number of doughnuts in the packet.
Cassandra: Two little doughnuts!
Westley: They were six!

By reinforcing the fact that the doughnuts were, in fact, six Westley is manifesting the importance the event actually had. Their first encounter was quite life changing, it cannot be minimized.

By not admitting that the doughnuts are two she is trying to cover up for something and lying through her teeth. (this is the message underneath, the metaphor). 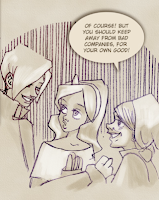 As you may recall Westley and Cassandra's first encounter happens on the Papadopulos Island in chapter 1.

He pays for the doughnuts she is trying to get for less from the old lady.

As he acts all cool and handsome, Cassandra looks unimpressed and ignores him. She walks away with her paper bag full of doughnuts without being affected by the presence of a major hunk. Food over boys still applies. 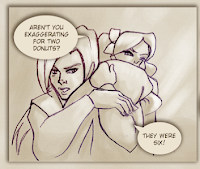 Afterwards, she passes by him and winks while stuffing her mouth.

That's when Westley, who thought had already kidnapped the girl, goes and grabs her.


Here the quarrels begins and the joke about the doughnuts is born. 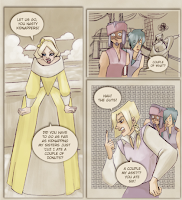 The quarrel continues on the ship.

They are established as the litigious couple, at first, but I wanted to reverse and twist this trope a bit so a few variations on the themes were required.

(a little reoccurring item here is the "put a sock in it" follow by a kiss. The first time is unwanted, the second time is after he proposes and the third time is hinted at as Wes says: can't we skip to the part where we put a sock in it and smooch happily?)

So afterwards I have Cassandra tests the waters - to see if she is dealing with someone who is not willing to compromise a bit - by compromising a bit.

Luckily for her Westley finds her funny and brings her to the kitchen.

Insert here second theme that brings to physical contact and misunderstanding: PAT PAT. This is more of Kes' theme.

Here it still is a casual gesture and many pages away from the accident itself. It's a gun on the wall. Its impact will be stronger.

Although a bit still quarreling here Cassandra knows that Westley is not that unreasonable. She bridges over to him one more time to get her back cured. Reaching over ignites chemical reaction. Life turns pink.

PINK is the third theme. It's Westley's theme.

The big doughnuts concept will work within the characters' individual themes as well.

And here he wonders about waking up with her: I wonder how it feels...
It's an emotional theme.

The two themes come in conflict.

Physical and emotional had not found a point of contact yet. Emotional has to come first, but physical took over and popped the emotion away.

Doughnuts come to the rescue. Cassandra uses them to tease him but at this point Westley's emotional state has been overtaken by pink and butterflies.

Again quoting the doughnuts puts Westley in a flaming mode and we know what happens after this. He realizes something, pink kicks in and they finally kiss.

After that he wants more and asks for it.

This sequence here is representing Westley truly talking with his heart in his hands.
His façade drops and his attitude changes from his usual cocky self to a sweeter tone.
(we'll get to know afterwards that Wes is truly a softy).

Cassandra realizes that he wants to pursue what it might have been just an accident in the afternoon. (of course at this point the butterflies have joined the pink to the max, LOL).

The Pat Pat, physical contact problem, is now behind us since the emotional contact is finally established.

To the point that Cassandra initiate the pat pat and is not too happy when other people's grope Wes' butt.

So after they get married the Doughnuts joke becomes something of a sweet way of making fun of each other and a form of romantic teasing.


Sure Wes and Kes problems aren't solved so easily. She is a bit scared about the future and thinks he has not planned it carefully for the both of them but live too much in the present. Girls have a tendency to look at the bigger picture. 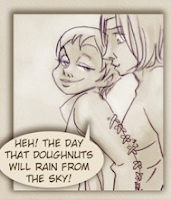 And this is when she launches the challenge. Variation on the themes of doughnuts.

She proposes the impossible. She expect gestures from him, not words.

Linking back to doughnuts: now they have to rain from the sky.

We are still in food over boys.

Along the way Wes finds the answer to his first question. The Pink is justified and gratified. Now Westley has to find an answer to all of Kes' questions too and must pick up her challenge.

So when he says this, Westley (who was looking for the perfect gesture to convince his wife) had already asked Quoque to make the giant doughnuts for him.

Six doughnuts in one. They are both right, they are both wrong. It's the ideal compromise, it's the perfect marriage.

He makes doughnuts rain from the sky.

She gets the message and you can go back to the first picture of the post only to realize that: she was the first one to fall in love, she had probably loved him since day one!

And this is Cassandra truly talking with her heart in her hands. She loves him, always did.

She admits the lie and unveils the metaphor.

Clearly it has to end with the accidents that started it all, for better or for worse so we close with a pat pat.

We still have to see Westley over food, right?

Doing call backs or reincorporations in writing helps create a stronger storyline for character based story. Some reincorporations are variation on a theme (doughnuts, doughnuts raining from the sky).

The important thing is to plant them in the beginning, reuse them along the way, develop them and wrap them all up.
Unfortunately to most audience these subtleties will get lost (one can suggest a re-read of the story. Try and read the comic now that you know that Kes always had a crush on Wes, LOL) so you have to hope in an attentive audience or you truly have to spoon-feed them with a massive flashback right before this moment happens. Which you might not like but might be necessary.

Whoever reads the comic in one go, now, when they get to this final part, will probably melt (especially if they are fans of a couple who can't find a way to fit together even though they are together, and still try to work things out).
Kes and Wes have struggled a lot. The struggle ends here.

I chose them to tell us that love is not easy and you have to work hard at a relationship to make it work, you can't be just swept off your feet without thinking.
Of course I also have the "ideal" love story, like the one between Cat and Callista, who is the perfect representation of young love, to me. They are not thinking about their future yet so their story follows a linear, exponential, structure.

I feel that, as you grow old, you take more things into considerations and struggle with reality more, no matter how much love is felt and put in the relationship you have to keep a practical mind.

That is why a complex theme like this needed a less linear and more sophisticated structure.
Posted by dedasaur at 1:53 AM

Wow... after having read all your writing tips/lessons, I realized that I CAN put together a wonderful if I know what I'm writing about and how I put it together. All you said, and with the various examples from TPB, I finally understand!
In my AP English class, although we're not focusing on creative writing, all of which you said is part of what my teacher's teaching me! I finally understand! This work can be fun and isn't necessarily easy. So thank you for expressing what I subconsciously already learned this year and by expressing it in a way which I can understand easier!! Thank you so much!