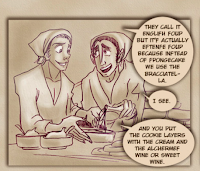 If you look for the description or history of the English Soup, around the internet, especially on Wikipedia, you'll get a bunch of vague information.

This website knows it better as it connects the origin properly to the Bracciatella cookie, the Alchermes wine and the original dessert that inspired it: the trifle.

Now, English Soup is what you get nowadays with sponge-cake, dipped in liquor and yellow custard-like (but not really custard) cream.

Originally the dessert was made with Bracciatella cookies. Somehow this process is very similar to the tiramisù one (we all know that the real tiramisù is made with Savoiardi cookies and not sponge-cake).

Truth be told several regions dispute the origin of the dessert, between Bologna and Tuscany. Each of them with their own version of it.

So basically here it is, this famous dessert that got Kes drunk, made of large cookies dipped in alchermes liquor and layered with custard-like cream.

The Alchermes takes it's name by the Arabian word al-qirmis, that basically means: crimson and cochineal (due to the fact that the insect was used in the preparation of the liquor to give the red die - which, of course, made it very unpopular in the last century when people figured came to know about it. Now they use food die to make it instead).
Posted by dedasaur at 12:44 PM