What happens in Amado...

First of all a very important message.
I forgot to post the deadline for the polls: March 2nd!
After that the illustration will be packed and shipped to the winner.


Now onto the silly curiosities at the end of this chapter.


Let's start from Rose who is, now, expecting the child of her Unchained Moolody romance.
This is what she is telling Pifo. 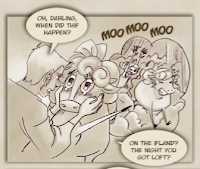 This is the night she is referring to, remember? So the night Kes got married... Rose... did too.

If you remember she was buying shoes when Steeves stumbled upon her on the island. She was having the shoes shipped to the Alidivento but was carrying a little packet in her hands. 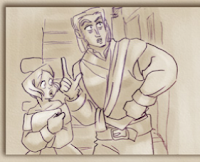 When she was talking to Steeves, during the big chase scene, she was still holding the packet.

She then passed the packet to Steeves when she met her aunties and he kept carrying the packet for her the rest of the time.

When she left, Captain Steeves was still holding onto it.
The same packet he was carrying the day they were supposed to meet and she could not show up. 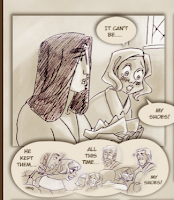 In going to her rescue Martin does not leave the packet behind.
He carries it with him in his bag.

Now, he swam all the way to the ship but the shoes did not get wet. Imagine how he must have swam to preserve those shoes!

That's how amazingly chivalrous he is.

Pea cannot help being touched by such a gesture. You did too, didn't you?


So two of the accidents that were barely hinted at in Amado have now become solved mystery.
Posted by dedasaur at 1:06 PM