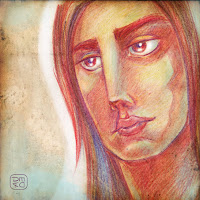 I was again testing the color pencil on a different kind of paper. This one works a little better and I came up with a little portrait of Josh.

I like Josh he is an interesting character. When I first created him I knew he would be the kind of character that would be misunderstood and would make people jump to conclusions.

I was reading a book about how the internet has changed people judgement these days and the reason why it's better never to have a dislike button or the WWIV will start over the internet (well, it has already started in a way with all this sopa, pipa, acta and now the digital millenium act - if I were you I'd be aware of what google has in store and would switch to duckduck.com)... oh, WWIII you ask? It's happened already, we lost it, it was against the money that never existed and now the whole World is bankrupt and in a riot.

But I don't want to bother you with depressing thoughts. As I was saying because we are used to click and like or leave to dislike without giving second chances (in a way we lost patience as a Virtue) I wanted to test how true this was.

If Josh really existed he would either be the idiot of the village or dead, in his century. His lucky star is definitely a devoted brother and the fact that, somewhere, along the way, they were taken in by their grandfather who was a Duke. So a combination of wealth and loving family gave him a decent life.

All I know is that I wish all of us to have more patience and understanding and endurance for everything in life. :D
Posted by dedasaur at 4:01 AM

I actually like Josh as a character because he intrigues me, I never know what's in his head.

It's damn difficult to try and decide what's best for others, especially when they're too young to decide for themselves (because when you're a kid you know what you want, but not what the consequences of your decisions will be, and that's also a part of what makes us decide -or, at least, should- so I agree, it's impossible to know what's best (I suppose every case is different, anyway. Even if they have a common problem they still deal with it in their own personal manner, I bet)). The world is cruel to those who are different.