Today we talk about Conflict and how it must relate to the character's dream/goal in order to make the dilemma more believable.

We already saw in a previous post called "The in and out of storytelling" (check the index at the bottom) that there can be many typologies of dreams but all can be summarized in two categories: the character looks inward or the character looks outward.

How many categories of conflict are there? Well, mainly two, internal and external, just like for the dreams... but the conflict can also be broken down a little more and go specific. 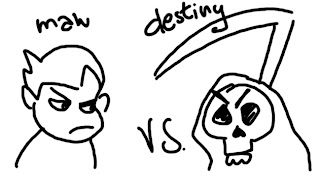 - Man vs. Destiny: this type of conflict is one of the oldest ever invented.

Let's face it, original died with Homer and so it is obvious that he would use this conflict in the most archetypical story of all times: the Iliad. In form of gods, prophecy or legend Destiny had dominated stories whose protagonists are always Chosen Ones on a Quest (the quest applies to most stories, so does the Hero's Journey, but some stories are more literal than others and therefore deserve to be called epic).
Think about Oedipus and how he cannot escape his fate: to kill his father and wed his own mother.
Think about Neo, who is the chosen one, and how he was given a false prophecy to be forced to fulfill his destiny.
Think of the Skywalkers and how they were destined to stumble upon each other.
Or even, more recently, Scott Pilgrim who even has a book entitled: vs. Destiny.

Fate is something you cannot escape. He is your father. LOL. 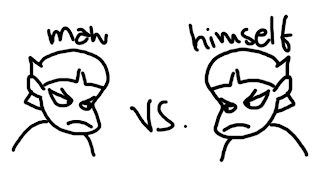 - Man vs. Himself is also referred to as: internal conflict.

Some characters are a bit emoting or have problems and they have to resolve their own internal conflicts before they can take on the World.
If you think about American Beauty, even though Larry is vexed by his family, his internal conflict is what keeps him bound to his situation, lack of self esteem, his passive self. The moment he finds his dream, something to live for, he decides to take care of himself, this restores his self esteem and he manages to confront the rest of his problems with strength.
The inner conflict is also represented in Star Wars - The Empire Strikes back, in the scene where Luke enters the cave and Yoda tells him that he will find in there only what he brings with him. 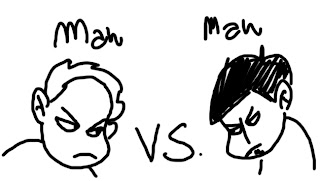 - Man vs. Man: this is the classic antagonist vs. antagonist.

Usually this is the case where the dream of our protagonist is directly clashing against the dream of the antagonist. Think about hero vs. super-villain kind of story: one wants to save the Earth the other one wants to conquer it. This is the kind of story where two characters compete for the same role/position/or girl. So they are against each other... as Pro- in protagonist stands for "in favor" and the Anti- in antagonist stands for "against".

In Man vs. Man I usually would put a smaller branch, although many may not agree with me: man vs. technology. I think one of the reason why I put it under man vs. man is that usually it's a one on one type of conflict. Man vs. machine (like in I-Robot) usually have a machine that has been built by a man whose dream was in conflict with the one of our hero -  ironically in conflict. In War Games, Josh had been built with the hope that he might learn from his mistakes, the hero of the story just wants to play a game instead and finds himself in a lot of trouble. So somehow I feel that behind the machine there is always a human mind/intention... even Hal from "2001: A Space Odyssey" was not supposed to do what he did and he did what he did because of the way he was programmed. 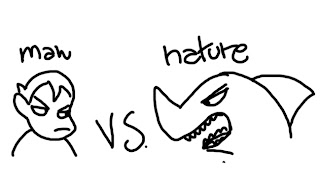 This one is a very hard to overcome because we are part of Nature, you can think of them as survival stories. You cannot defeat nature completely but you can survive that stuff Nature throws at you. If you think about The perfect storm, it's quite evident who has the upper hand. Usually catastrophe movies go in this category but let's not forget Jaws (although, as far as Spielberg is concerned his experience was Man vs. technology since the mechanical shark kept sinking) or movies with giant creatures (alligators, anacondas, squid, octopuses, bears, etc.). 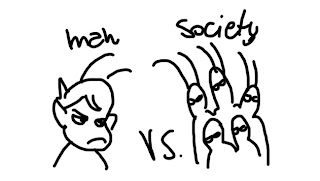 - Man vs. Society: this one is a tough one and usually has a revolutionary concept behind it. It's about human rights or legal rights and stuff like that. Think about Philadelphia a movie that makes a stand in favour of gay rights and brings the protagonist's case to court challenging the whole system to raise awareness on a difficult topic. But even if you look at small little stories like A Bug's Life... the society of ants really does not trust and think well of Flick at first and he has to make a way into the World to prove himself to the society that is supposed to accept changes but does not want to.

Once you determine the nature of the dream of your character it is important to choose a proper type of conflict to oppose it.


Clearly if you choose a sport theme you have to find an antagonist for your protagonist. Imagine how funny it would be to see Rocky Balboa struggle against a twister to be able to train! His goal in life is to become a boxing champion, you have to give him an Apollo Creed!

Conflict and goal balance off each other. Pick a main one first (you can add little subplots and subconflicts later too) and work around it.

The clash between these two will create the struggle, the situations and the stress that will help your character go from an assemblage of characterizations (his trait) to a true human being.

As Rob mcGee teaches us: True CHARACTER is revealed in the choices a human being makes under pressure - the greater the pressure, the deeper the revelation, the truer the choice to the character's essential nature.

Index
1) Know your story
2) What if...?
3) Theme and thesis
4) The In and Out of storytelling (the dream)
5) Memorable and Meaningful
6) Target
7) A narrative tone
8) A storyteller
9) Why love your sketchbook
10) Call back and reincorporations
Posted by dedasaur at 10:43 AM