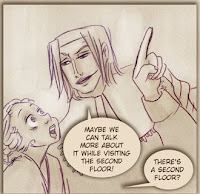 A second floor... is it something so extraordinary?
In facts... it was.
Usually even if you'd had a staircase in a house - particularly one that is not build on top of a shop - it would lead to a terrace or a space under the roof, kinda like an attic, where you would either store or put things to dry... like corn, wheat and pickles...
That kind of second floor... was usually meant for laundry.
To have a second floor with rooms, bedrooms, mean also that you might have a loggia above and not just a random attic.

Now, truth is Cassandra comes from a big mansion... right? The Academy looked pretty big... but I don't know if you remember that it was a bit run down and had pots on the floor and the soldiers were sleeping in a big room that might have been like a big hall... and the sisters were sleeping together.
Dottor Fynn's house might be smaller in size... but it's a house that feels like a home! 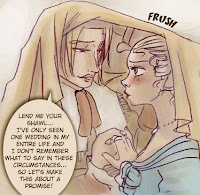 Why the right index finger and the shawl?
Well... the only marriage Westley might have witnessed could probably be his sister's (the owner of the ring).
He was probably pretty young and does not remember much of it but he still wants to follows tradition.
Traditions are part of who he is... even though he might have lost faith in God and stuff he was still raised in a certain way and, being the traditional man he is, he probably wanted to do things the proper way... the Jewish way.

So you see... Cassandra becomes a Jewish bride.

But he does not remember much except the finger and the shawl... so he come up with his own formula and a promise. But it's not like he is a Rabbi or think this version of the ceremony is "legal" (like Kane). They got married in a catholic church the night before but he want to give Cassandra something she could remember.

Pea's hands are ones of a working woman now.
Martin calls her Milady and offer his hand only to receive not the hand of a lady, in return, but one of a person who scrubbed decks and has red fingers.

A lady does not work. Her hands are white and soft and never suffered what Pea's hands had to suffer.

That's why he assumes, since she does look like a lady, that she is prisoner and is being treated like a slave, forced to work against her will. 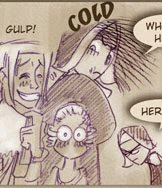 The cold glare... yup, that's where Pea got it from.
It's a family thing... the girls were raised by nuns.
Pea and Kes would spend more time with the aunties, to learn the good art of becoming a perfect lady, hence a wife.
That's why they grew up adopting the same mannerism, in the end. 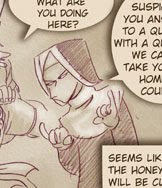 By the way... the malicious pinkies... come from the aunties too.
Posted by dedasaur at 12:03 PM

Thanks for helping us to see the family behavior connections. I still have the belief at least one of the Aunties was a 'heretic' and 'unholy' in her youth (perhaps even all). We'll see if I am right or wrong.

You could think of "If I Were A Rich Man" and "Sunrise, Sunset" in the scenes at Dr. Fynn's house...