Marsala wine is a sweet wine produced in the city of Marsala (that's where the name comes from) that got very popular outside of Italy in the XVIII century.
It also became much stronger in its alcoholic content after that... to be exported and kept well during journeys...
So before that popularity reached it... it was still a very light, sweet wine. So imagine how many cups Cassandra had to drink in order to get drunk.
Now you know why she's got to pee so bad!

Baroque music did change quite a bit in just a few years... already towards the 1650 madrigals had gone from 4 voices performances down to three or two voices.
Monteverdi helped transition from polyphonic to monodic and concertato.

Girls the age of Pea would already know madrigals with soloist part and in the XVII century madrigals already had instrumental music accompanying the voices. Because England stayed behind in the evolution with madrigals... I am thinking Pea should sing solo madrigals with basso continuo using a lute, which was more common in Southern European Countries. 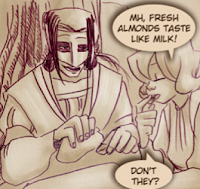 They do.
In fact if you go to Sicily not only you find many dessert that are based on almond paste (like marzipan) but you can also make a drink called orzata... unlike what Wikipedia states... the real one is home made by melting almond paste into water and there aren't any other ingredients to it.
It's only cold water and almond paste.

How could this happen? In some Regions priests were prepared to receive eloping couples (see... in Sicily there's this thing called "fuitina" - which means eloping - that is still in use today! Latest count was 300 per year!). In short sometimes, if the families were against a marriage, the girl would arrange to elope or pretend to be kidnapped by the future groom.
Sometimes they would run away, let the night pass and then force the family to accept them (allowing them to "repair to the damage", being the girl no longer a virgin, with a wedding ceremony) or they would go and knock at the church's door in the middle of the night and the priest would marry them on the spot (particularly lucky for the girl: better married than dishonored). It became common, with time, to marry these runaway couples on lateral altars, not the major one, and little by little knocking at the church's door shifted towards dawn. 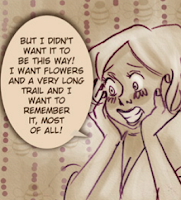 No, brides had no trains, no long veil, no nothing... they would only wear their best dress (white gown came to be used in Victorian era) and leave the hair untied, falling down their back (as a symbol of purity). Of course each religion and Region had different types of ceremonies...
Right now Kes is just blabbering nonsense (in the Italian version she mentions pageboys and long veil - cultural related joke to accuse the useless lavishness and pomp of today's wedding ceremonies, such a waste).
Posted by dedasaur at 12:49 PM

If you'll pardon me going into a dim view, it is especially good that the gal could arrange it... better that than a fella kidnapping her to marry and despoil without her leave, that was done at times, too, wasn't it?

Who knows...
at times she would be the one eloping/kidnapping herself with the help of her love.
At times she was actually kidnapped and then forced to marry the guys who kidnapped her too.
Very sad option, if you ask me, but different times... different habits... it's the beauty of history.