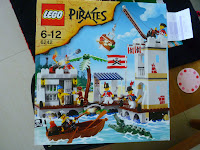 Okay I got a new Lego... and I managed to put it together with my Dad (first time putting his hands on a lego in 72 years! XDD) which never happened in my childhood so I kinda regressed a bit and had a blast. 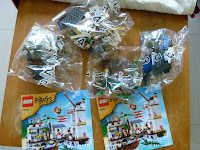 This time around... how nice... they put numbers on the bags.
Thank God... even though this thing has very little pieces and would not drive you nuts, like the Flagship does... 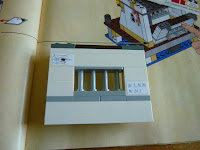 I have to say that this part cracked me up.
Lol... he is counting the days he's been imprisoned, marking the day of his trial, then keeps on counting! XDD 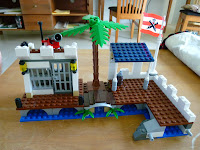 The work in progress looks very pretty... but it made me wish some things would go into another direction... I wonder if I am ready to buy loose pieces and plan my own structures now...
*_* 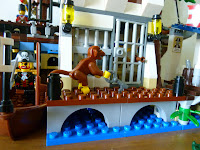 When I saw that the monkey holding the key and the pirate holding the banana... I started laughing like crazy.
So... it goes like this...
The captain says: hurry, monkey!
The monkey goes: Uh, oh, I don't work for free.
The Pirate goes: you give me the key, I give you a banana!
And that's how he escapes. 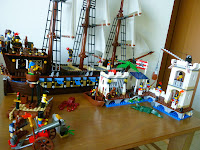 In the end this is the final result and also the end of my pirate collection... with the pirate ship being in currently in Italy and, one day, shall be reunited with the rest of this stuff.
I got to buy the fort right on time because it's gone out of production and out of stock. I felt sad because there is no more Pirates... but then I saw on the catalogue that they will have a whole series based on the Pirate of the Caribbean movie (the upcoming one).
I hope they'll make more ships and cool looking forts! *_* And there will also be Jack Sparrow!
Posted by dedasaur at 3:16 AM