And here's the post we all wait for so anxiously! More than the release, more than games and contests, more than naked pirates.... *_* we want... Deda's blabbering about all the silly stuff she puts in her comic!
Hooray! Banners show up from the left and from the right and a marching band opens the post....

Alright alright! Then I shall not keep you waiting.
I spoke about human branding a lot in previous posts so by now we know that there were mainly two reasons why men would be branded: if they were criminals and if they were slaves. Foxy belongs to the first category and Cat to the second one. We're all clear on this è_é, yes, let's pass onto the next topic. 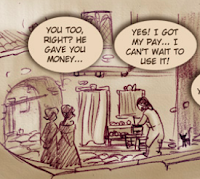 Cassiopea receives her pay according to contract and she feels pretty good about the fact she gets to spend her own money, although she cannot quite give the name "gratification" to her feelings.
But Castalia receives a pay too even though it looks like she does nothing on board. Truth is the contract is something Kane signed to keep Pea happy and off his neck... but no matter what their duties on board are (it's not like Cassandra is a genius at washing undies and the girls cause troubles more than once) they would still get their allowance. So it's not a pay... it's an allowance. Everybody would get an allowance before they go to shore, which does not equal to the whole amount of money they've "earned" while pillaging and plundering... but to petty money to be used for fun for a couple of days.
So it's not true that pirates would waste their entire fortune on women, gambling and wine (or rum)... well maybe some idiots did. Usually, when pirates would retire (if they managed to reach retirement), they would retire filthy rich.
Nevertheless because she thinks she earned her money, Pea feels good about herself.

A 13 strings lute came into fashion around the year our story is set.
Pea likes music, being and accomplished lady, there are quite a few things she knows how to do... one of which should be play and sing.
It's a girl thing, alright, so she is the girliest of all girls.

Josh is chilling with a Hookah.
Well, back in those days they did not know that tobacco could be harmful and smoking was more of a social habit.
People would smoke shisha from the same hookah and discuss of business and other things.
At times more than one pipe comes out of the big glass container and so people get together smoke just like people would today, in a pub, to talk in front of a beer.
This doesn't mean that Josh is a smoker... I drink a beer or two every couple of months... that does not make me an alcoholist.
This is simply a quite moment, between brothers, chilling and spending time together. 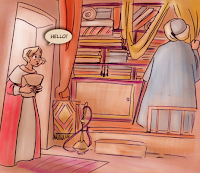 Continuing on this topic... as you can see Callimaco has a hookah in his shop too. The platform he is standing on is usually a place were he and other merchants would sit together and discuss about business while smoking on a nice "Persian rug".
Oh noooo would the smoke affect the fabric?
Well, it might linger... but hookah smells rather sweet. It's kind of weird but at times it can small like some sort of incense.
Nevertheless smoke is just smoke! I am allergic to it, I can't stand the smell of cigarettes... but I wanted to show what social life was like on land.

Of course, money over flowers for this young silk merchant!
He is not a banker... how dare Josh borrow money from him as if he were the Fuggers?
Although I don't think their banks existed anymore... I am pretty sure they were still pretty popular: Fugger... the greatest bankers in the world!
By the way... Pea had gotten in the shop to buy a type of very fresh fabric... that had just come into fashion: muslin. This girl knows her stuff... and this merchant does too because he got what she is looking for!!!

I already made a small post on Turkish coffee... I thought I'd show you what a coffee pot looks like.
It's veeery pretty!
It could be very simple or decorated.
Coffee is another thing that reached Europe through merchants and immigrants. Another element of socialization.
Think about it... even today, if somebody comes and visit you... you offer a coffee.
In some cultures the importance of coffee is bigger than in others. In Italy, for example, it's almost a ritual.. they know their coffee and they cannot do without.
Now imagine... I go visit my relatives in Sicily once every year or so... and every time I go and greet all my great aunties they offer me coffee and I cannot refuse. I usually only drink one coffee per day... when I go around like that... I end up drinking 8 or 9 per day. As a result I can't sleep at night, but you can't just say "no"... it's Coffee. 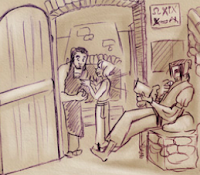 Looks like Giuseppe is the only blacksmith on the island!
Look at all the things he can do... how do you know?
Well... see the sign next to the door?
It says that he can put horseshoes to your ride, he can pull your teeth (yes, like a dentist), makes swords, pots and metal utensils, sharpens your knifes and... he must be filthy rich! 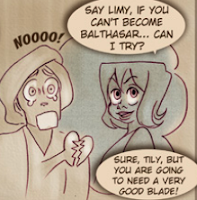 Limy and Tily.
Apparently there was a sixth one... one who would pair up with Castalia and get very much along with her.
One who would give her a nickname, a cute one, and receive one from her.
We've seen that, to the other sisters, Castalia is just Castalia and they go around in pairs. But Castalia is Tily for Callimaco.
That does not mean that they have a big brother little sister complex. It only means that, at one point in life, Castalia too had somebody she would get along with: her older brother.
Now before he left to do what he had to do, becoming the Pirate Balthasar, he had planted a little seed in Castalia: to be a Pirate Balthasar you need a good blade.
That's why the girl put that one down as her main priority.
We also know why Castalia spoke to Kane so openly and directly when they first met without going "dear sir" and stuff like that. Callimaco and Kane are very similar and send out the same vibes.
The Papadopulos sisters have a different approach and level of relationship with men.
Castalia, even though she put herself almost on equal ground, does not really talk to anybody else but Kane. She is a focused girl.
Pea, on the other hand, even though she talks to everybody she keeps everybody at a distance.
Lio only talks to good looking guys.
Cassandra is everybody's friend.
Callista... everybody talks to her but she only replies to the ones who don't scare her.
Pifo is in Heaven, of course.
See you next time!
Posted by dedasaur at 12:58 AM