Kane Child Souffled on me. 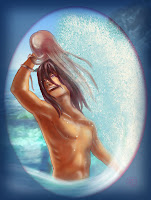 I don't know what went wrong, my soufflé blew up... maybe the flu was already there or I could not put down on paper the idea I had in mind. In fact I think I had in mind way too many imaged... I wanted a background but it's hidden behind the splashes so why even think about it. I wanted the sea but maybe let's start from saying that probably the drawing in my mind was more from a lower angle.
So I would say that at least this thing helped me figure out the colors and I shall tackle the subject again, some day, and with a more relaxed mind.
Now I'm preparing the greetings for Valentine's day. Hopefully that one will turn out alright.
Posted by dedasaur at 1:10 AM

It's lovely... I wonder if it's just the light turning his eyes sort of mauve...

It's probably the color I used for the outline... I never changed the pupil to black so the outlines are all kind of mauve.