I can finally answer all the questions about the Cassata!
And you finally get to see the so long awaited reward for bathing once a month.
Pirate have a sweet tooth... I'm an unusual pirate because... I really cannot eat Cassata, it's way too sweet for me and I don't like candied fruit. I have to confess though, that it smells fantastic and looks wonderful. In fact I am very fond of its look and always take plenty of pictures of Cassata cakes when I see them on display.
I enormously disagree with the guy on the American Wikipedia... Caseata has nothing to do with Cassata, besides there are documents dating 1575 who state that the Cassata was one of those delicious treat you should never bypass.
Therefore I will here translate what's written in the Italian Wikipedia... which is closer to what I've learned during my studies too.
The Cassata, the way we know it today, came only to be after many centuries... the main ingredients were introduced little by little by the many dominations that took turns in Sicily: the Arabian had introduced sugar cane, cedar, bitter oranges, tangerine oranges and almonds... (initially the cassata was just a mixture of sweet ricotta cheese and sugar baked in a dry pastry shell); it's during the Norman domination that the pasta martorana was born (what people call marzipan, which is fundamental to glaze the cake) and the cake became cold and was not baked anymore; the Spanish domination introduced the sponge cake and chocolate. The rest of the decoration came with the Baroque.
Well, in my drawing the cassata is not supposed to be already stripy and green... and la zuccata (the beautiful decoration with the candied fruit) was not introduced until the 1873 or so.
But what's the fun of putting a Cassata in a comic if you cannot draw it as pretty as it is? And maybe... who knows... Angela's dad was an innovative pastry chef who inspired the future pastry chefs to create a zuccata and color the cake XDDD

The guys are eating sweets and drinking wine, we'll talk about the wine later when the topic will show up in the comic itself.
Right now we see the first symptoms of Cassandra getting... tipsy.
She is stealing people's food... she is stealing a man's cherry! That sounds wrong, and came out wrong, so... sorry, pun intended, I thought it would be hilarious! 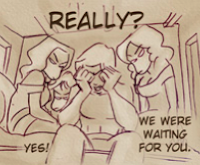 The doctor finally got to bathe in a tub as he desired...
Where would you bathe in old times? Of course, bath houses... which were usually also providing other kinds of services... and where usually built right next to the tavern.
Quite often a tavern would have a first floor with a "restaurant", rooms on the second floor that worked as a "hotel" and then... rooms in the back rented to ladies who could provide extra services. You could also order a bath...

Apparently the game Cassandra is playing is called Red Hands in English.
Wikipedia is kinda confusing but basically you have to hit the hands above yours. Pirates would bet money? Would they play this game?
I am pretty sure Cassandra initiated it... and she was betting cake... then it degenerated.
Posted by dedasaur at 12:55 PM