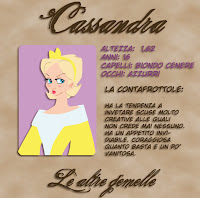 The liar!
Cassandra is a very creative, compulsive liar. Of course, nobody believes her so she is a real Cassandra!
She has a very good appetite and a hot temper. If one were to make a list of the twins from the most dominant to the less dominant... Cassandra would be number 3.
But I am telling you, she is not as strong as she makes other believe... she is sweetie and let's consider the fact these 5 girls have never seen the world outside of the Island and have been kept captive in a Military Academy by 3 nuns for 16 years! Townsfolk don't think much about Castalia but the others don't have an easier life... that is why even when she yells: but I am not the crazy one - while kidnapped - the peasants don't care.
Well, it's not the crazy one it's the liar, what's the difference? All the Papadopulos girls are kind of odd, anyway.
So I guess she had to fight against prejudice all her life - in a different way than Castalia who would pick a fight . but still...
I guess, with time, her heart will be woed by a pair of interesting eyes that can see right through her and still find her charming, no matter what!
Posted by dedasaur at 10:35 AM

Email ThisBlogThis!Share to TwitterShare to FacebookShare to Pinterest
Labels: Characters