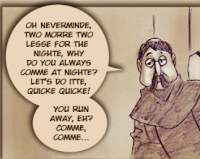 There aren't that many curiosities this week.

Mainly I need to answer two questions.
The first one is: where is Fickle? (look at page 10 - 9 on smackjeeves) He was in the room all along.

The second one: what's the matter with father Guido?

So Kane and Castalia ended up in a franciscan church (as you may have noticed from the Tau cross on the wall)... and were surprised by father Guido... who speaks, well, Tuscan (more florentine than anything else)! That's why he sounds like he got asthma.

He says something about: two more... and runaways. Clearly a lot of people must be going there in the middle of the night to get married.

Hush hush weddings were quite common.

From what Kane tells us father Guido performs a lot of marriages without asking too many questions and would marry anybody to anything on the spot ha ha ha.

Okay... truth is the guy talks like my Music History teacher, back when I was in University (that means he has been in this story since 1992), he was incredibly funny. Anybody from Siena here can recognize him? I heard is a big shot at the Chigiana now!
Posted by dedasaur at 12:07 PM