Final appointment with the curiosities for chapter 17. Let's start with the aunties! 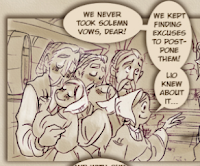 There are several different types of nuns and convents and each creed and order follows different rules.
In general a nun can be a novice for a maximum of 6 years, then she has to take solemn vows. Once they take solemn vows they are nuns for ever.

This tells us two things about the aunties: they are much younger than we thought them to be. They are definitely less religious than they wanted to appear.

What happened to the aunties was going to happen to the Papadopulos girls who didn't get married, eventually: Lio and Callista were in serious danger. Castalia was supposed to marry Pifo and God knows if Cassandra could have managed to get married by just following Pea's example. Now Lio was definitely going to become like her aunties: being a naughty naughty, groping nun!

Now clearly aren't there better things for girls to do than aspiring to marriage? Not in the XVII century. You stay as a spinster in your brother/uncle's house and you are not even considered a human being. You have no freedom, you don't have a say in anything and you are simply a burden too. Life passes before your eyes and before you know it you are dead and did not achieve a single thing.

You ought to praise the Spearmen  (Christopher, Will and Will - since Marco followed uncle Aristotle) for sticking around Aristotle all those years just to stay close to their beloved.

Maybe I should write a story about it.

By the way what's a Fraschetta? A Fraschetta is a peculiar type of Osteria with a peculiarity: it only serves wines. Nowadays fraschettas will serve cheese and dry meats with the wine but originally you were supposed to bring your own food there. So what Wes and Kes are having is a sort of... afternoon snack (and the aunties are providing snack from their own personal kitchen, their own food), it wasn't really a place where you would go and eat. 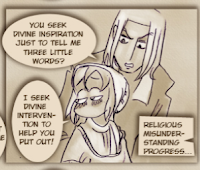 On the religious misunderstanding... clearly the dogma of Trinity belongs to Christian religions. It developed in the early stages of proto-christian religions to move away from accusation that stated that Christians were not monotheists. Eventually the council of Nicea (325 a.C.) established it as orthodoxy (as it did to many other things) and there it stayed.

The Holy Spirit, for Jews, is a different concept. It's linked to God's thought and it's seen as Divine Inspiration... it's not like the patriarchs of the Bible woke up one morning and stated: let's write the Book of Books!

No, they were inspired by God. (I am making it simple here, eh, it's a complicated concept to explain, because it's hard to grasp already!).

On Holy Ghost/Holy Spirit I received a few questions. Now... the stuff you find on the internet is rather confused and confusing. Go to the books. The way I have been taught, when  I was studying history of the English language was: some words entered English through Latin when the first monks arrived in Britain around the IV/V century (and around Saint Bede's times too). For example, when the first monks arrived and found the Saxons they tried to teach them the concept of Heaven. Now, Heofon in Old English/Saxon means Sky. The monks told them that Paradise is in the Heavens. So two words entered the language: Heaven and Paradise (one form Saxon and one from Latin). Then the folks found themselves without a word for sky... and that's where they borrowed the Scandinavian word for it. All words containing "k" in the English language come from the North. That's how Holy Spirit (from Latin) and Holy Ghost came to be together, but Holy Ghost was "official" and more used in higher level English. In a way when Holy Spirit entered officially the English language in the XVIII century (if I remember this correctly), it did not come from the outside, it came from below, from the poor people.

"A true gentleman always carries two kerchiefs, one for himself and one for the ladies in distress!"  it's good manners.

This gentleman carries his kerchief folded. How polite is that?
From one to ten... plus one hundred!

So far everything about Martin has been proper and gentleman-like.
His hankie makes no difference. 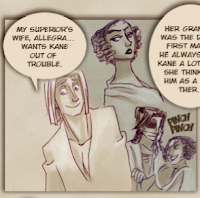 This is Allegra, the contest winner.

Finally, as promised, she makes her appearance in the comic and even say a line.

I hope Kanako is satisfied with the way I drew her.
Anyway for the rest of the contestants... stay tuned because I have a little surprise in store for you too in chapter 18. :D 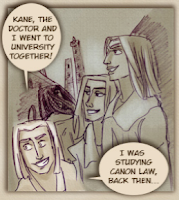 Bologna (yes, play on words with the fact it was baloney too ha ha ha)... is the oldest University in the World! It was established in 1088 and is still considered one of the best Universities in the World.

(I did not go there to study though, mine is the tenth oldest University in the World: Siena; I still have my 750th anniversary t-shirt from 1990! *_*).

So from what Martin tells us he was there to study law (maybe hoping to become a priest, and a high hierarchy one!), Wes was studying medicine and Kane was studying art.

Martin, coming from a good family, definitely sounds in the right place... but how on Earth did the pirate Balthasar and his doctor get there?

I guess there will be a special about this too... ha ha ha. So stay tuned.

p.s. the guy Wes studied under, Malpighi, was a great botanist as well (hence the doc's interest in perfumes and other things) and was also accused quite often of not being... very orthodox.
I think by then Kane was jumping from bottega to bottega (artists shops) but mostly would study under the Guercino.
Posted by dedasaur at 1:26 AM

I understand what you said is true about spinsters from noble/wealthy/middle-class families, but what about peasants? Didn't girls, both married and single, pull their weight in whatever ways they could (in the very least because they had to)? What if they had no brothers or other male relatives, would they have to be left something? Would they be sent away?
I guess that's still me wondering, if you have to aspire to finding a man and raising a family, how can you hold your own and be independent? Major values dissonance...
I think you can guess who this is, and I'm sorry if I offend...

Me again. To add to the last comment (if you find it fit to print, disregard this if you don't), it seems the only way I could play in such a world where no sane woman can aspire to anything or own anything of her own was to make a woman who would be all too aware of that, and insanely take it to the extreme and believe she's completely helpless in the face of a man who would take the worst advantage of such a privilege (take control of both her and her family's farm, gaining the right to let it grow fallow and kick some dear friends of hers off it) unless someone could convince her she would be allowed otherwise... I didn't know if there was any other way to play a woman alone in that era unless you have her selling the only thing she has available... if she could work on a farm, make crafts to sell and other things like that, then this isn't exactly burdensome, is it? Is there any way a girl can get advantage by what she does rather than what she is?

You should read that book by Georges Duby I mentioned previously. He actually wrote a serious of books on the condition of women in different centuries as you question requires an answer that would cover around 12 books.

Usually not even the second born son was worthy anything to a family unless he became a priest or a soldier.... imagine what it was like for noblewomen

For the poor and middle class, if they were free, usually women with no male relatives had rarely survived.

Your second thought is completely anachronistic.

Just like you, right now, would never think of going back to the kitchen and aspire to some weird stuff you don't know the existence of yet.

Imagine in the future all women should aspire to have 8 arms and went for it, would you want them now?

I don't know what would be acceptable--I keep thinking of the general idea of a woman on a farm big enough that it needs all hands but small enough for just a few to manage if they really tried, and who had male relatives at the start, but the most significant ones were lost to her in different circumstances--she would have a few male relations and friends to help her after that, and takes care of some women and girls that her lost relatives were close to, and she wants to be able to keep the farm in the family somehow...
I also keep wondering whether there was a strategy for a girl to attract someone she wanted and to deter someone she didn't want...

Poor people were not subtle. Ignorance is something that does not allow them to think outside the box and all the do is believe the everything belongs to God.

The way to attract and deter is just buy saying yes and no to people and there aren't any middle ways.
Also that might only work amongst her equals and not with people of a superior class as they would never consider her more than cattle.