We have a few more Secret Santas to go,
but with the holidays in the way some might come for the Epiphany day,
it's an Italian tradition after all to receive candies for January 6th :D

For today I have two more Secret Santa:

1) A picture of Martin in uniform; 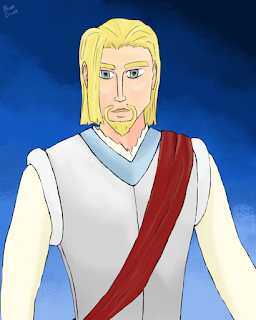 -A Secret Wedding Above the World-

The waves sang a soothing duet with the calm winds over the ocean waves. The sun long kissing the horizon a fair goodnight, welcoming to moon in it's stead to keep watch over the world and it's travelers. Though many do not rise long enough to take in the true beauty of the moon and her work, one sailor watched wide awake as the stars twinkled in delight at his company.

The dark figure perched high in the mizen nests turning his puzzled and seemingly sad questions to the night's sky. The evening wind tried in vain to life his spirits with a gentle caress of his hair. The large golden eyes searched the heavens for some kind of answer, as much as the moon wished to give the longing soul one she could not speak. Only glow and watch as her old friend looked on lost in his mind.

Cat sighed as he leaned against the mast. He had taken the longest watch since the others were enjoying the glow of both new and old marriages. Callista had insisted she was content in watching over her sister while with child so he felt some time to his own would be good. He only wished he'd known sooner how miserable being alone could be after having such a sweetie near all the time. He missed her smile, her warm hugs, and soft lips, her quiet way of speaking and gentle nature.

"Who would've thought a bunny would amount to an idol to a heathen?" he wondered aloud. Thinking of his life before Kane, before the Alidivento, Cat couldn't help but have bitter memories of his past. His mother was a loving sweet woman and he had nothing of hers, Topaz the scoundrel had left him nothing to have. But despite their master, she loved him, so much it killed her. Another sigh of sorrow escaped him, she had love. Before Callista he had not known just how powerful it could be. He was almost sorry for not wanting his mother to have Topaz's love, almost. The man was cruel and a narcissist, no slave driver could know true love.

Lost in his past he wondered what life could have been like free, free to love, to travel, to be his own master. He could have worked for food instead of stealing, maybe even gotten married like the others.

"But without that life I may have never met Kane or the Doctor...or my cutie." That alone gave him some comfort for his troubled youth.

But how she would have looked on our wedding day. Beautiful without question, but soft. Like an angel.

Before he could reach any further in his thoughts he was brought crashing back to the earth with a strong grip around his upper body. Struggling at first he soon noticed it was Callista.

"Cutie you scared me, I may have hurt you."

A bit startled herself Callista settled back beside him before speaking.

"Sorry sweetie, normally I can't sneak up on you. I brought you some honey cake from Pifo. Are you alright?" She leaned on his shoulder and could see he had a lot on his mind. "You know if you're troubled you can always tell me." She went up on her knees and gave him a warm familiar hug.

"No cutie I'm not troubled. I was thinking what you would look like on our wedding day if we had one."He lowered his face and let his shoulders droop a bit in her embrace. "I was dreaming of how you would glow as I watched you." he gave a boyish blush and hugged her small frame to him.

Blushing even more than he she hugged him close in her delicate arms like a tender child. "We don't need a wedding to know we're in love sweetie. I know you're the only one I'll ever want."

He looked up at her and smiled a slight grin. "I know, and I love you for loving who I am. My past and all. But your sisters," her finger came so softly on his lips he closed up the words if only just to enjoy her touch.

"Kane said it before, we are alike in looks only. I don't need a wedding to be happy. Just you Cat." leaning down she gave him a tender, warm kiss. "Just you." she looked into his deep gold eyes with her own hoping it would be enough for him to see how much she loved him.

"I know." was all he could say and he pulled her between his knees to gaze upon the coming dawn with the woman he loved.

"Callista." he whispered against her neck and held her close with one arm. "I know I can never give you what your sisters have. But I can give you this."  He turned her face to his and kissed her with new passion and longing. Filling her lips with his own desire to prove his own awkward love. Pulling away a bit breathless he smiled a smile that reached his eyes now shimmering with morning's light.

"I promise to love you more than anyone ever could, and to spend my life as a slave again. A slave of love to you. If you'll keep me." It was clumsy and forced out fast and awkward but it touched her heart like a million honey hot cakes warming in an oven.

"Of course Cat. But not as a slave, as an equal. I'm nothing without you either."

As the sun rose to begin the day, she shared a special sight with her sister moon. Two lovers, both outcast in many ways becoming one with a simple exchange of woven rings. A secret wedding above the world.
Posted by dedasaur at 1:11 AM