How to read a Family Tree:

Where it says Con (which stands for conjoined) it means they are married or a couple (I put a heart to make it easier for those who aren't used to family trees) -
I used a standard family tree design and simplified it.

These really are just a regular/normal/standard family tree. Check out the diagonal rubbish Wikipedia posts instead XDD.

This first family tree is the one Kane describes in Chapter 18 - mind you this is how he knows it and serves as an explanation to the conversation he has with Castalia.

So practically it was my fault when I wrote down the whole speech for Kane I forgot an extra "great", hence the confusion as one of the generation got lost between the lines. 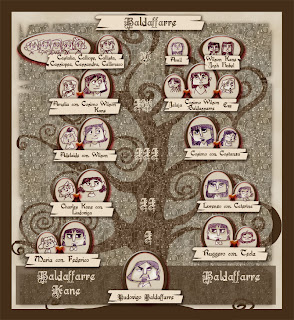 Same happened with the Italian as I should have used bis-bisnonno! In the end I just put "ancestor" in both languages but a family tree should fix all the problems.

SPOILER - The Gem of the Mediterranean Sea:

The second family tree is the new one, right after The Gem of the Mediterranean Sea.

I took the old one and modified it by adding the characters we know in color as we see them in the comic (this should come as a visual aid).
As you may see the only differences are the addition of Pandora next to Old Cosimo and shifting Kane up one generation next to Villy whom he thought to be his father but is, in fact, his half brother :)
Everything else stayed the same.

You actually only need the top 3 rows as those are the characters we met. The other ones are ancestors.

The third Family tree is the Next Generation. In case of extra breakdown I further explain it here 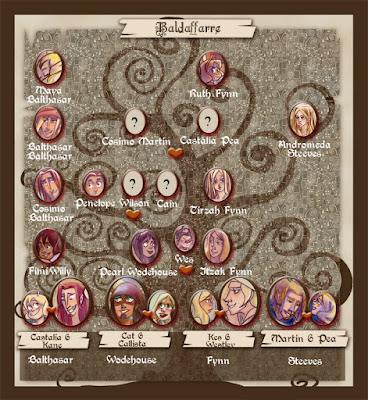 The tree must be read vertically and there is a lot of space between the Steeves and Andromeda because I spaced the children upward by birth date (and Andromeda aligns more or less with Balthasar) but also by Conj.

We have Balthasars, Wodehouses, Fynns and Steeves.
Cosimo and Tirzah have 3 babies, Penelope (whom we see in "Daddy Home for Christmas") baby Wilson, who is Kane and Wes' favorite because he looks a lot like the two of them, and Cain.
Itzak and Pearl give birth to the ultimate lady killer as baby Wessie grows up to be a mix of Cat and the doctor!
Gorgeous Balthasar and beautiful Andromeda (so beautiful everybody wants to steal her away) give birth to this inhuman to die for boy named Cosimo Martin who goes on to be worse than Martin, the most handsome man in the WORLD if not the universe...hahahaha. Allow me the joke but they had to have an extreme baby, don't you think. I bet he glows and sparkle in the sun... Someone like that cannot be drawn honestly! Maybe you guys should give it a try. I hope you enjoy the tree and if you have any questions... please, ask! :D

----------------
Alright, let's please go over the fact that they marry among cousins ^^", as I explained in a previous blog post it was not uncommon - in some family it was even hoped for - and this stuff happened in Europe a lot in the XVII century, way before many things were known to civilized peeps... including Christmas trees, white wedding gowns and blood transfusion! XDD Again information on cousin couple in history can be found Here  You know I like to be as historically accurate as I possibly can.