In good company - books and stories 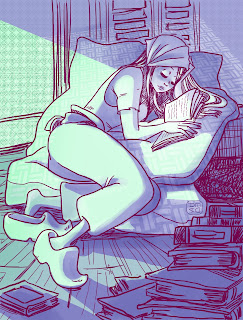 I drew a picture of Callista a few days ago spending time in the best company ever :D

I think I am barking at the wrong tree when I say that reading is very important but if you want to be a writer reading, everything and anything, is one of the most important source of inspiration.

The thing is I was reading like crazy and in general if I did not read I was watching movies and tv shows and if it weren't tv and movies I would read magazines or essays and lots of comics,

I wasn't an avid reader in the typical sense but I spent most of the time trying to figure out what would come next and found out that some times I got it right.

So you see after many years of studying and practicing and learning on the job I've reached that point whereby, when I watch a movie, I already know how it ends.

I often joke: you see the movie and I see its matrix on the screen.

My friends say that like that I don't enjoy it... which is not true because surely I don't go to the movies to watch a story that's been told anyhow.

I don't for the idea I go for HOW it is delivered.

Most of the times good ideas are not properly delivered and movies become... well... Prometheus.
That movie had a very good idea.
The thesis whas that children have a secret desire to kill their parents to replace them.
Take Dave he has two characters to play with to prove his theory: the scientist and the rich girl.
The rich girls sides with him, she wants her father to die because she feels she deserves to take his place, but he doesn't want to die.
The other girl loved her parents and does not agree with the thesis.

But look at what happens by the time the movie ends?
The girl who loved her parents leave the planet, carrying Dave along, to go and find the ancestor planet and destroy them (she wants to kill her parents). All thanks to Dave's manipulation.
Unfortunately the one who wanted her father dead did not survive because she was not strong enough to truly go after her father and get rid of him.

Excellent idea... delivery? Sucked ass. Prometheus was poorly scripted and that is quite unfortunate.

But where does the brilliant idea come from? Oedipus!
So, let me tell you.

Reading is important to come up with original ideas but also reading/watching/listening with a keen eye also helps understand HOW to deliver.

1) Frankenstein by Mary Shelley
2) The Vampire by Polidori
3) Edgar Allan Poe - the Pit and the Pendulum (because you can tell a story with a man locked in a room)
4) Avatar is a short story by Théophile Gautier (has nothing to do with the movie except name and concept)
5) Around the world in 80 days by Verne is the first book to talk about time
6) The Count of Montecristo by Dumas is THE revenge story everybody rewrites
7) H.g. Wells, any of his books... Invisible Man, War of the Worlds... must try.
8) Mark Twain's short stories are even better than his novels at time. Try the Diary of Adam and Eve. It's hilarious.
9) P.G. Wodehouse is one of the finest humorists in the World.
10) So is Jerome k.Jerome. Try Three men in a boat.
11) You must read your Jane Austen to know what satire is all about.
12) You must know your Jane Eyre (by Charlott Bronte) to know what reinforced gothic literature (surely if you can go back to Radcliffe's Mystery of Udolpho go for it but it's not an easy book).
13) Some Greek tragedies or Roman comedies by Plauto would not hurt.