I realized we are very much behind with chapters curiosities.
(In general I did not do a good job keeping up with the blog this year).

By now you must have figured out that this naughty white kitty is related to a certain Diagonal Cat.

And why that certain diagonal cat likes fair kitties too.
Ach, mother complex is strong in TPB characters, hahaha!

Aside from the silly cameos - which will be plenty as usual - let's go to the juicy stuff.

This ceremony was common in a lot of monarchies. The French called it Levée.

So Circe takes advantage of her morning ceremony to hear reports from Dioniso and give overall instructions as she gets ready for her day (see the little dudes in the background spying on her - like Susanna and the old men hahaha - they are not admitted officially to the ceremony but being in the inner circle they are allowed to spy). 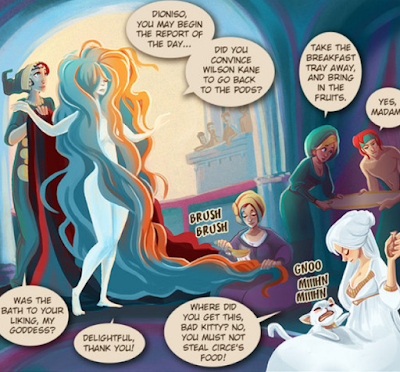 So if Circe's looks are an illusion what is Scylla brushing and why Circe she putting on make-up? Because it is a ceremony and as such the goddess has to keep up appearances.
It's a daily routine.

In this scene we also get to know that Catstalia has a thing for human food and Gemma is keeping her on a diet.

Meanwhile Kane makes friends with all the artists living at the edge of society.
They are his kind of people and he sort of gets along with them very well: he teases them, scolds them, picks fights with them... the usual friendly pirate behavior hahaha.

These people existed before Kane reached the Circeius and so, as he works his way up, he gets to know about their relationship with one another.

A workaholic girl, rivalry between musicians who cannot get along and love stories, all come into the picture.

They each have their own priorities and probably because they never sat down and organized their work and life... they will never get to rank up and reach the inner circle.

It might not be a bad thing after all. I have a feeling this inner circle is a mighty boring place/status.

In this chapter we are also introduced to Master Dingen.

This awesome castrato will play a major role as musical mentor for Kane.

Kane also accidentally makes "first contact" with Catstalia as he involuntarily drops chicken from the window and now the Cat will absolutely connect his presence to food. 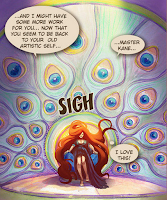 In this chapter Kane also manages to bargain his art away for the permission to stay in the library.

As we all know he studied art in University and he loves to draw and admires Pifo so much too hahaha.

If you think about it... this guy is quite a geek he likes books and art!

Anyways this display of creativity lands him the job of his dreams! (and he confessed at one point that he was never given a choice in his life but given the choice he probably wouldn't have become a pirate). 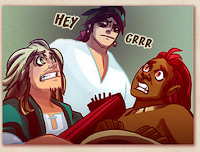 This chapter is also quite transitional.

But something very important happens: because Kane is very mercurial and impatient... he manages to take leadership of the artists and start putting order in their lives.

Again on one hand this is because he wants his share of quiet time, but let's not forget that Kane is an enabler too: he wants others to achieve their full potential.

We also get to know that Kane keeps clandestinely in touch with Westley through letters, using Bianca as a homing pigeon.

Please don't tell Bianca I called her a pigeon.

Kane likes to climb to high places (brrr, not me! not me!) and so goes all the way to the roof to write his letters and send them back home.


And here he finally makes the ultimate contact with  Catstalia, who was happily singing her meow song to the puffy clouds. 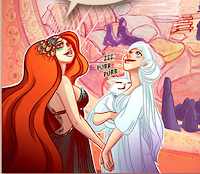 The chapter ends on a very successful opening night. After Kane has frescoed the theater and prepared a great show for the goddesses.

This is the first time we also see Circe and Gemma interact.
We know Circe rarely gets to see Gemma and gives her space.
We know they have breakfast together as Gemma is present at the morning ceremony. They have meals together in the theater.
Here they are holding hands. 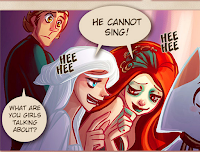 After the pole dancing number they even become accomplice to the major prank Circe is going to play on Kane (when she asks him to sing).

So these sisters' relationship is actually not that bad.

But how does Gemma know that the Pirate King cannot sing?

Hopefully we'll get to know the answer soon. All we get to know at the end of this chapter is that Musical week is about to begin, and what a week it will be! :p
Posted by dedasaur at 5:45 AM