I thought that since the new long running series has finally started I should bring back the curiosities - also useful for a recap, after so so long. 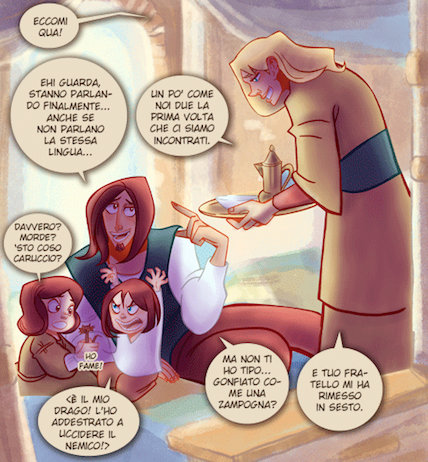 Chapter 1 begins and ends with Fimi - at the start we're in Callimaco's home.

You may remember from Chapter 10 of The Pirate Balthasar that this house is behind Callimaco's shop, Kane bought this house for his brother and is enough to fit two families.

The last time we saw them Callimaco, Josh and their two wives - Nairi and Yester - were living happily with little Fimi, who happens to be Josh's daughter.


All conversations in this house takes place around coffee. 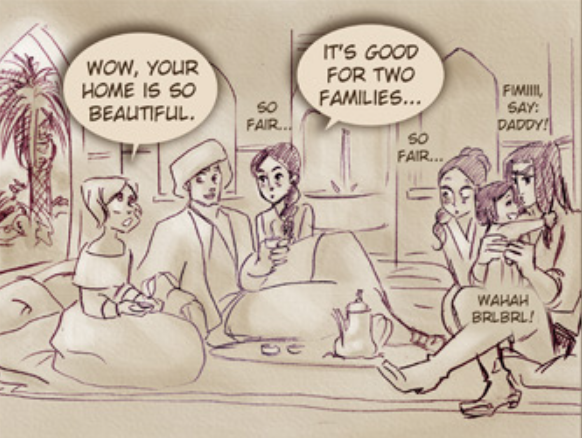 This is what the happy family looked like in chapter 10 when Pea meets them.

Fimi here is just a toddler and can barely talk.

We know from Long Overdue that Kane has lost his brother, as Nairi and Yester are not present anymore either... suspicious arises.


Then why is Fimi calling Kane "daddy"? 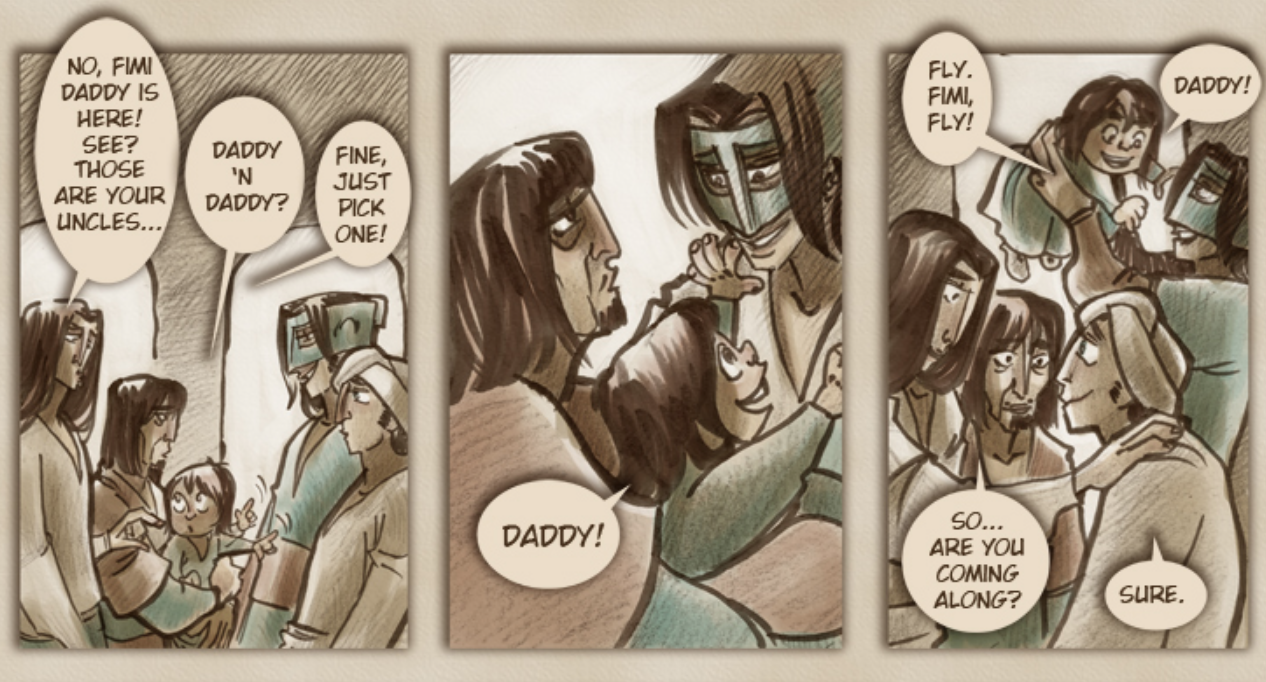 The Balthasars have very strong genes... they are so awesome full of awesome that natures clones them because she cannot improve on the original model hahaha.

Jokes aside... Fimi is confused by the extreme resemblance of her uncles and her grandpa to her daddy... so she ends up calling everybody daddy.

But she favors Kane particularly because he is very nice to her and plays with her.

So... having said so we do not know what happened while Castalia was away to Josh, Nairi and Yester but... at one point something must have happened for Kane to decide that he would become Fimi's daddy.

And so now they are father and daughter.

So, two things are to be remembered here: 1) The Gem of the Mediterranean Sea is a direct continuation of Long Overdue. 2) As such Castalia has just disappeared, Ahr has gone away with Colapesce and little Cosimo was left alone without mom and big brother with his new found daddy.


So here is Cosimo doing what he always does at night. 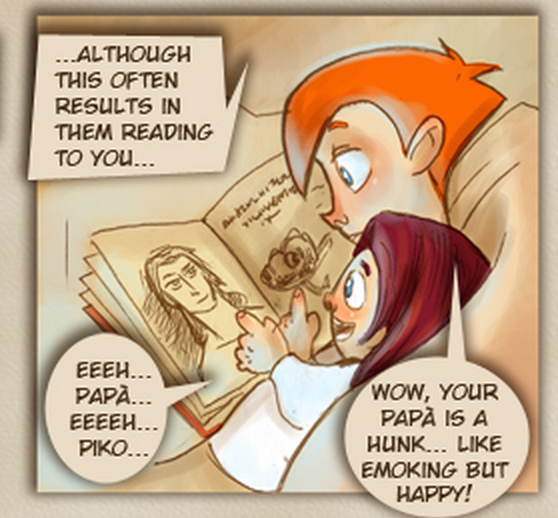 He reads his book before he goes to sleep.

Like he did with Nicoli when he first met her.

Only this time around on the book there are new pictures, drawn by Kane... lots of pictures of Castalia and Ahr of course (as he promised Castalia at the end of Long Overdue that he would draw pictures of Ahr and they would read the book to Cosimo every night so he would not forget his brother).

This is the doctor's kitchen.

At this table baby Itzak squisk his peas - and tried to attack daddy in The Pirate's wife!

And if you are wondering if people only have one set of clothes... you should know by now, changing often and having many clothes was an issue even for wealthy people like the doctor! 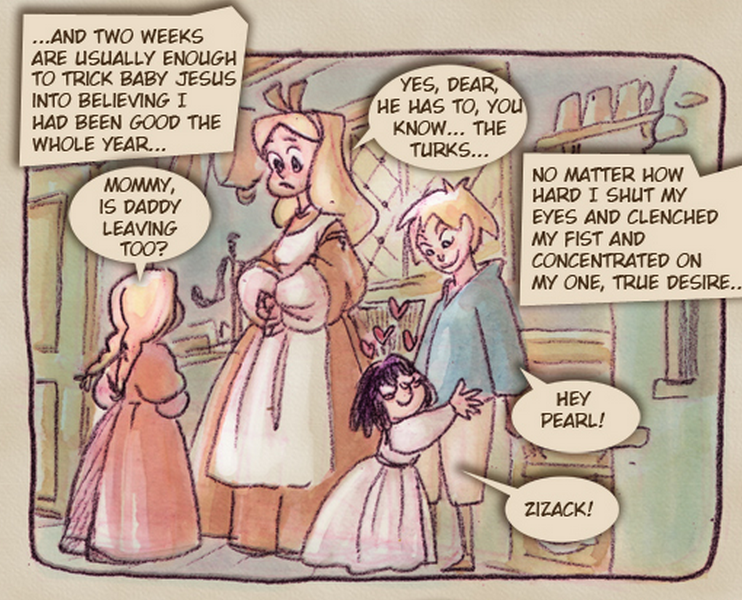 Anyways they do own a big kitchen and since Kes and Lio are always cooking and baking stuff together it is also the kids favorite room.


So they always all gather there. It is clear that when the guys are away the kids stay with the aunties and with uncle Callimaco.

The baby we see - the poopy princess - is clearly Tirzah. 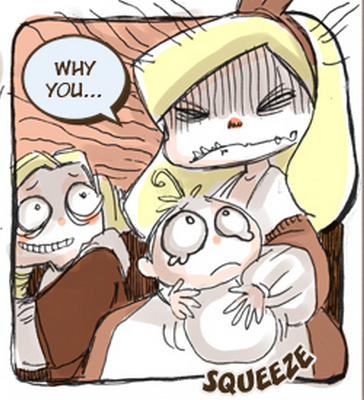 She is the little girl who wants Daddy Home for Christmas.

You may remember her from Andromeda's story as well - the two girls have a crush on Kane and always torture the poor diagonal cat Lorenzo while playing "mom" with him.

But it is time we talk about Fimi and her coffee.

Because we know that coffee is a sign of hospitality and coffee is a very important part of life, isn't it? (just say yes).


So Fimi picked this love for coffee and serving hot beverages from her uncle Callimaco. 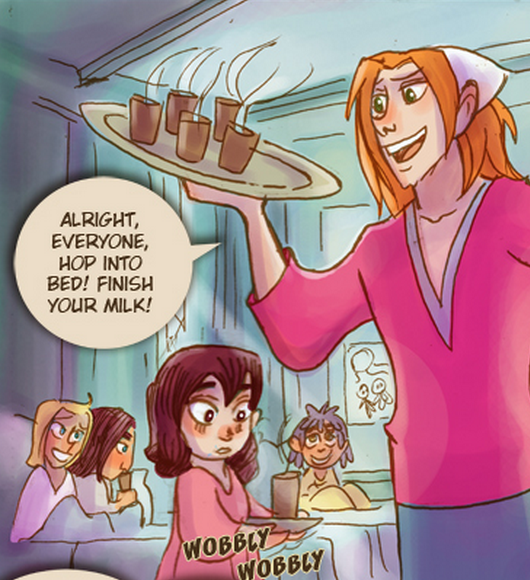 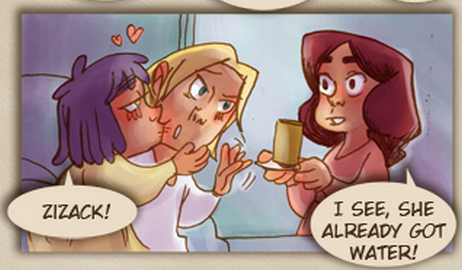 That is why you will always see her with a cup on a little plate.

Apparently she is not very good yet... but she is working at it and getting better. 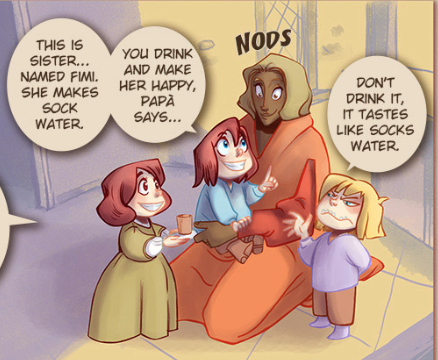 How are we doing so far... are things coming back to you? Okay.
Let's carry on. 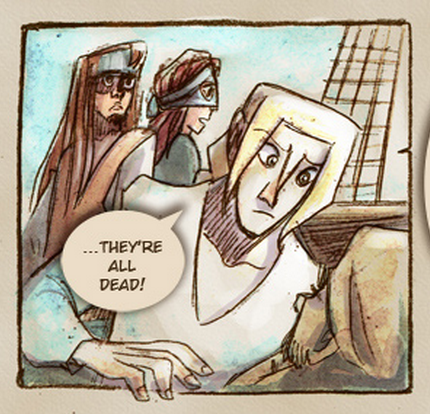 Which means the masked Balthasar we see on The Slave Ship is actually Amil/Quoque... because of Kane's decision that his little brother should replace him while he is gone to fetch Castalia back.


The mask is again to attract attention on himself so that people might not realize that Kane is gone and so... it is a smart way to keep control over the sea. 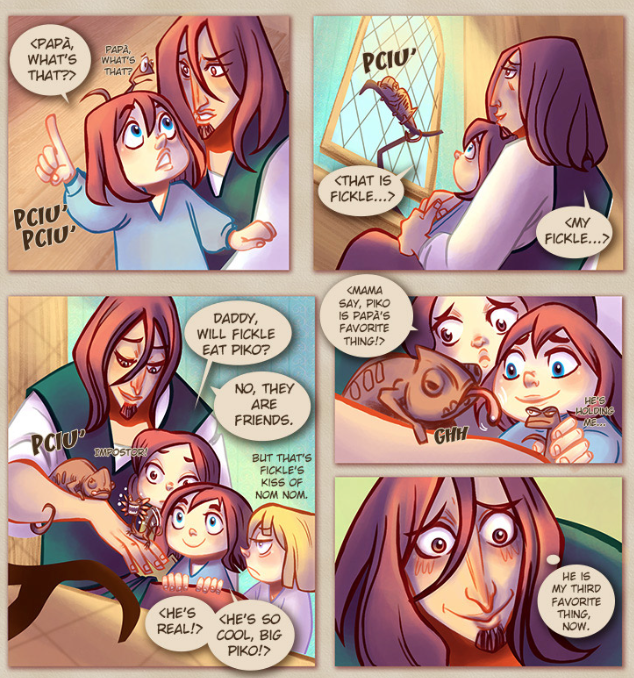 What is this all about?

1) Piko is named after Fickle: Cosimo has only seen Fickle in pictures so when he reads the book he cannot say Fickle's name properly and keeps calling him Piko.

So Big Piko is Fickle and small Piko is the little lizard that lives on Cosimo's head.

2) Cosimo only speaks two languages: Lingua Franca (which he does not speak too well) and Greek (the secret language).

All of this was established in Long Overdue.

3) Fickle goes pciu' picu' when he is hungry.

You may remember this from page 60 where Kane discovers that his son actually speaks Greek fluently.

That's why Cosimo can communicate well with his auntie Kes - who apparently curses her son in Greek - but not with his sister Fimi  who speaks Italian and Armenian only. (because Nairi was Armenian)

So... what about Fickle becoming Kane's third favorite thing?

We already know that Castalia surpassed Fickle... and now that he has kids a parent's love is the greatest form of love there is.

Now, you don't really think Kane could prefer one child to the other, do you? Even though Cosimo is his real son... Fimi is still his daughter and all the more she is all he has left of his brother whom he loved immensely.

So it goes without saying, sorry Castalia, but the list is now: My Kids, My Wife, My Lizard. 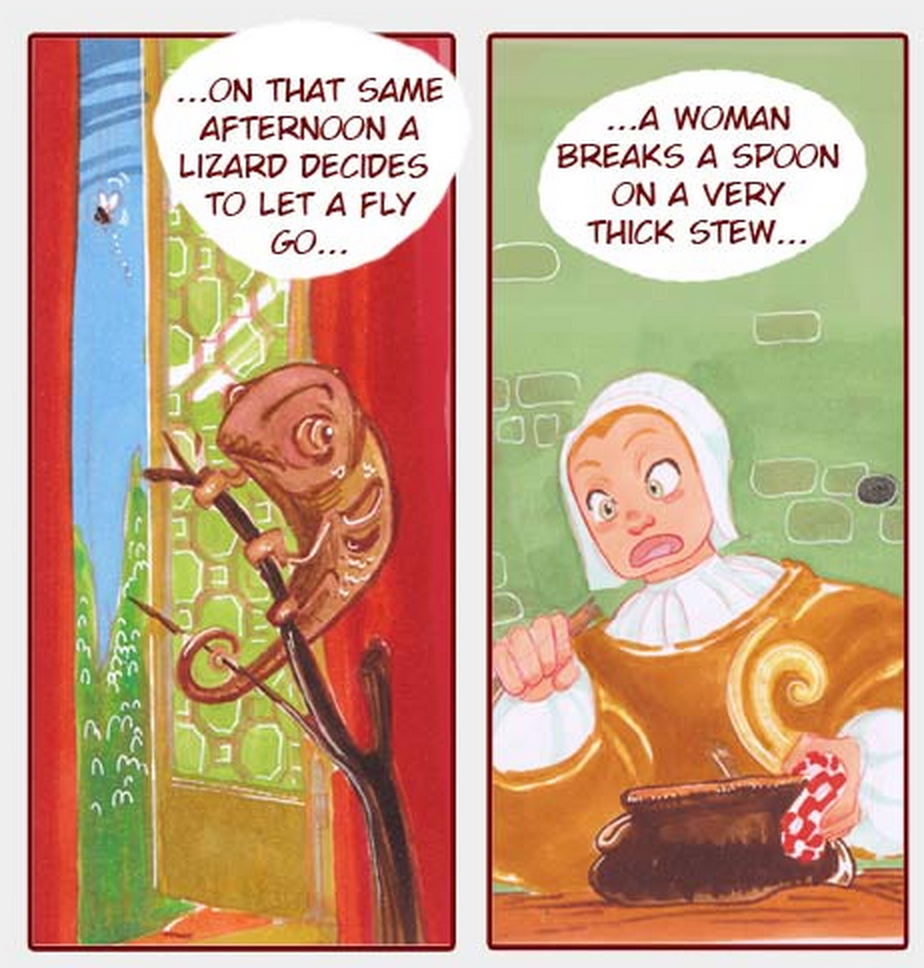 And it goes without saying, he still loves his lizard even though he now lives with Cassandra and has been retired for a while and replaced with Bianca the raven - Fickle is a bit old now.

She grew attached to the lizard while on the ship, when her maternal instinct first kicked in and had to take care of him during the times he had been poisoned. 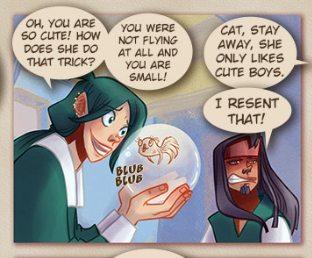 Colapesce's trick is revealed here.
Awrata is actually a small gold fish in a fish ball.

When our mermaid signs though she makes it look like Awrata is a much bigger fish flying around.

Truth is she is in a very thin fish ball and Colapesce juggles it around like David Bowie did in Labyrinth.


Clearly she cannot do that for very long 1) the ball is heavy 2) the fish needs to breathe!

That's why Awrata wants out of her ball every half an hour or so. 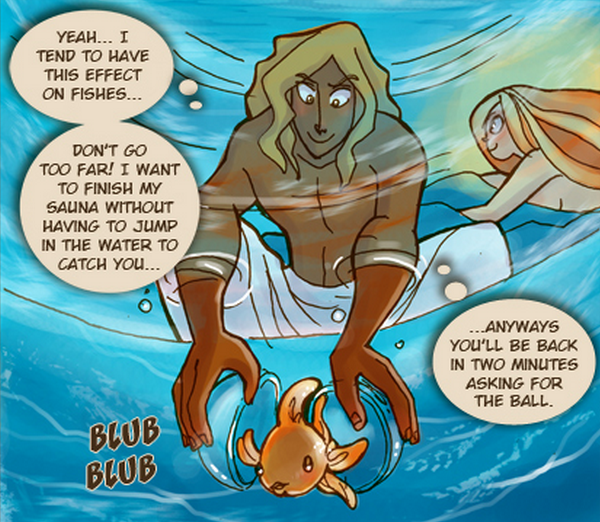 Anyways when Colapesce is singing and creating the illusion her speech bubbles are blue.
And yes, Awrata likes pretty boys and is extremely jealous of Ahr - as in... nobody can touch him.

Oh, and this is the dress they are talking about... from Long Overdue. 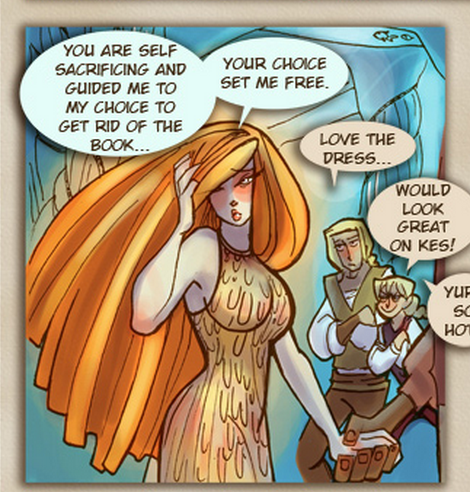 Now... the tomb.
This is Josh's tomb. The name is on the stone but also Kane words refer to the end of Circe's special. 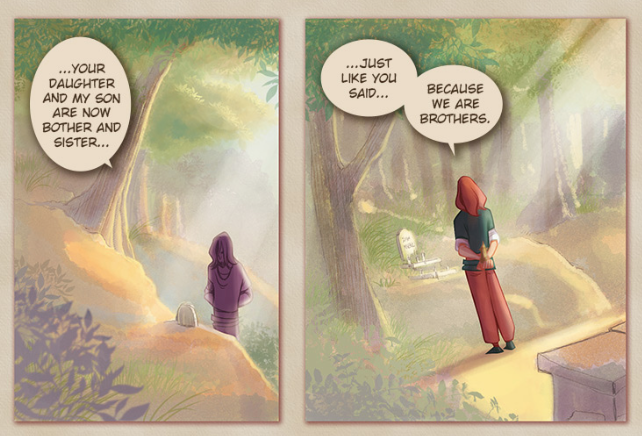 We realized by the end of this chapter that Fimi actually does remember Josh and is aware of the fact that Kane is not Josh but one of the many "daddys". Which breaks Kane's heart a bit. 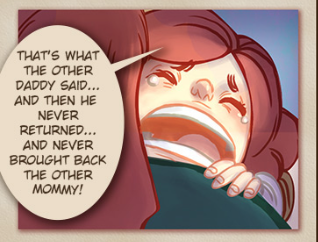 We understand by her words that something might have happened to Nairi as well. We just have to wait a while for Kane to tell us the story of what actually happened while Castalia was away with Circe's crew.

One thing... it is very unusual to bury people outside of cemeteries. Especially Catholics cannot be buried outside of consecrated ground, so the unusual location of the tombstone should give you something to think about for the next few months...

Also keep an eye on this bell... 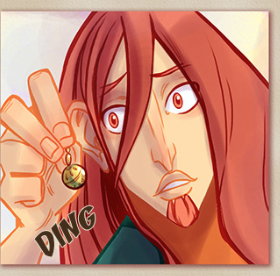